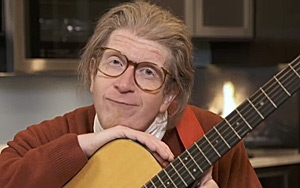 With a rare confluence of Valentine’s Day and President’s Day coming this weekend, it’s not only the chocolatiers, florists and lingerie companies looking to inject some romance into their holiday-themed promotions.

Appliance and electronics retailer H.h.gregg is looking to show a little love for the hardworking members of the household with a social and digital video campaign dedicated to “Appliance Love Songs.”

“Valentine’s Day is not something a TV retailer would normally celebrate. But President’s Day is a huge sales point for us,” Andrew Vitale, digital marketing manager for H.h.gregg, tells Marketing Daily. “[Appliances] are with you every day, so why not show them some love?”

The effort, which stealthily launched during the Super Bowl last weekend, features fictional music artist Stan LaSteel (say it quickly) selling a collection of “appliance love songs” via a ’90s-era television music promotion. The video depicts a turtleneck and sweater-wearing LaSteel hawking songs with titles such as “When a Man Does the Laundry,” “Paradise by the Microwave Light,” and “You’ve Lost That Sudsy Feeling.” Shot in standard television format (as opposed to a more modern HD-widescreen or letterbox), the video has a decidedly late-night, informercial feel to it, and the songs echo work by early “Weird” Al Yankovich (though the well-known parodist was not involved).

“When you get into that parody thing, you should sound like the music he’d make,” Vitale says. “It’s almost like the ‘Dad Joke’ thing, where they’re so bad they’re funny.”

The video will appear on YouTube and through H.h.gregg’s social channels, driving consumers to a dedicated Web site, “ApplianceLoveSongs.com,” where people can tweet out the song titles to their followers for Valentine’s Day (and see offers for H.h.gregg-sold appliances, electronics and furniture) and follow LaSteel’s own Twitter account. Although the album is not available for purchase (“unless you know a store that sells fake albums,” according to a disclaimer), the phone number attached to the promo is a woking number that immediately plays Rick Astley’s “Never Gonna Give You Up,” (a.k.a. a “Rick Roll”).

“Sometimes it’s hard making appliances exciting and engaging people. This is a way to tie into social and engagement and make appliances fun,” Vitale says. “This is a way of differentiating H.h.gregg in the marketplace.”