Even Dad's Bad Jokes Worth Celebrating For Father's Day 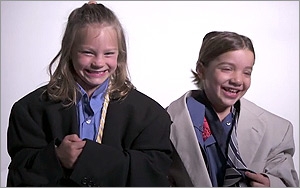 According to most Father’s Day marketing campaigns, dads are known for many things: Love, support, guidance, outdoor grilling. Another thing they’re often known for — but aren’t generally celebrated for — is a corny sense of humor.

Rather than take a traditional route (such as listing a number of “Top Tech” gifts to give dad on Father’s Day), appliance and electronics retailer hhgregg is celebrating the unsung, and often over-punny “dad jokes” in a new digital marketing campaign.

“[Dad jokes] are a part of family life, and it’s a unique twist on a Father’s Day promotion,” Andrew Vitale, digital marketing manager for hhgregg, tells Marketing Daily. “We thought we’d create something unique for it.”

At the center of the campaign is a 90-second video (created by BLASTmedia) featuring kids in dad dress-up mode telling deliberately bad jokes, like “I was going to tell you a joke about dairy, but it was too cheesy,” (as told by a boy in a fake beard). Other gems include: “Why did the policeman smell so bad? Because he was on duty,” and “What’s brown and sticky? A stick.”

“Video is some of the highest engagement content we can create, even from a mobile standpoint,” Vitale says. “It’s the perfect setting for this campaign.”

Aside from a small logo in the corner of the video, the retailer’s branding for the effort is subtle, for more of a soft-sell approach, Vitale says. Instead the retailer is looking for deeper engagement and viral sharing as the Father’s Day approaches.

“It was a conscious decision to limit the branding to encourage more sharing,” Vitale says. “It’s not a hard -sell approach, but it adds to the overall experience.”

In addition to the video, which will be running as paid advertisements on Facebook video, and on YouTube, hhgregg has created sharable pictures of kids dressed up as dads to share on Twitter (with the joke appearing in the tweet, and the punchline in the picture). The brand is using the hashtag #jokesfromdad for the promotion.
electronics, retail, technology
Next story loading