For Would-Be Presidents Day: A Couple Of Things About Trump 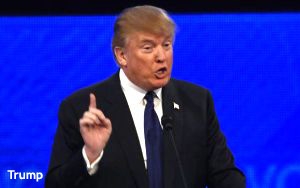 On Presidents Day, it is traditional to remember the great presidents born in February -- most notably George Washington (on the 22nd) and Abraham Lincoln (on the 12th).

But in this presidential-primary season, it seems appropriate to turn our attention to the would-be presidents too. And since this is a TV column, the one candidate who rises above the rest for consideration is none other than that famed reality-TV star Donald Trump -- former boardroom boss on “The Apprentice.”

I have been sifting through my own personal archives of Trump stories and columns to see if I can revive some little-known details about his past that might not be well-known or even remembered today.

As I have related in one or two previous blogs about Trump, I first met him in 2004 during the first season of “The Apprentice,” which he took upon himself to promote. I have described previously how “Mr. Trump” -- as he preferred to be addressed -- would call TV-beat reporters on the morning after “The Apprentice” to personally share the ratings with them, although his characterizations of the show’s “success” were generally exaggerated.

I recently remembered something else about him from those days too. I had been informed by several others who knew him that he was a germaphobe and preferred not to shake hands with anyone else whenever possible.

He was too polite to make a big thing out of it if you reached out for a handshake, but I tried to remember to be considerate and offer him a fist-bump whenever I ran into him. I forgot a few times (but not always) and he shook my hand anyway. But I can also honestly say that I have fist-bumped with Donald Trump, a man who might become president of the United States.

Now that he’s on the campaign trail, I see him on TV shaking people’s hands all over the place, so I guess he’s found a way to keep his germaphobia in check.

I also came across a quote from an interview I conducted with him in May 2009 that gives a hint of how he might be applying what he learned in the world of reality television to his campaign for the Republican nomination for president.

This interview was conducted in the corporate offices of the Trump Organization on the 25th floor of Trump Tower in Manhattan. Specifically, he sat down with me in the office of one of his sons, Donald Jr., who wasn’t there at the time.

Trump was promoting another season finale of “The Celebrity Apprentice” that was scheduled to air a few days later on Sunday. This finale would feature finalists Joan Rivers vs. Annie Duke, a professional poker player, in a matchup that was shaping up to be antagonistic because the two were said to detest each other (at least according to the pre-show hype).

To his credit, Trump didn’t play up their antagonism in our interview. On the contrary, he feigned frustration over it when he said to me: “It’s pretty sad. When you don’t have fighting, who cares, right?”

Fast-forward to the 2016 presidential race. These days, fighting with and antagonizing his fellow Republicans -- in televised debates and on the campaign trail -- has become Trump’s trademark. So whether or not the battle between Joan Rivers and Annie Duke truly distressed him, Trump apparently learned the value of conflict on “The Apprentice.” By the way, Rivers won.

It is also worth noting that Trump has engaged in petty feuds with plenty of people for years -- so his baiting of Ted Cruz, Marco Rubio and Jeb Bush is nothing new. The list of public figures he has feuded with over the years includes Rosie O’Donnell, Barbara Walters, David Letterman, Jay Leno, Bill Maher, Jerry Seinfeld, Robert De Niro, Seth Meyers and heaven knows who else. His feuds have provided fodder for journalists (myself included) for at least 10-15 years, if not more.

Speaking of debates, betcha didn’t know (or didn’t remember) that Trump himself was going to moderate a Republican debate in late December 2011. Earlier that year, he had toyed with the idea of throwing his hat into the ring for the 2012 election cycle, but decided against it. He then seemed to be having second thoughts and contemplated entering the race as an independent.

Since he couldn’t seem to make up his mind about running, he at least had the courtesy to bow out as a moderator for a Republican debate that was being organized by Newsmax.com, the right-leaning news Web site. This debate wound up never happening at all.

politics, tv
2 comments about " For Would-Be Presidents Day: A Couple Of Things About Trump".
Check to receive email when comments are posted.
Read more comments >
Next story loading