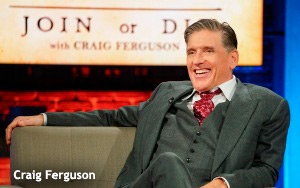 The History Channel recruited a late-night veteran to spearhead its first foray into late-night TV.

Actually, make that two veterans. This week’s premiere of the new History Channel talk show “Join Or Die with Craig Ferguson” not only features Ferguson as host, but Jimmy Kimmel as a guest.

Kimmel is one of three guests who take part in a panel discussion moderated by Ferguson that will try and choose “History’s Biggest Political Blunder” from among six contenders. Six choices also form the basis for the second show in this 22-episode series -- “History’s Worst Medical Advice.”

The first two episodes of “Join Or Die” -- which derives its name from a famous cartoon published by Benjamin Franklin in the Pennsylvania Gazette in 1754 -- air back-to-back this Thursday night (Feb. 18) at 11 and 11:30 Eastern. Subsequent Thursdays will feature just one episode at 11.

Do not tune in to “Join Or Die” expecting to hear learned historical discussions. This same message of caution also applies to any expectations of comedy that you might harbor as well. Although this show is intended to take a tongue-in-cheek approach to its “analysis” of history, the laughs are few and far between as the guests seem to have left their “A” games at home.

In the first episode, the panel -- comprising Kimmel, Hollywood publicist Howard Bragman and a young comedian named Jen D’Angelo -- take a stab at discussing six examples from relatively recent history of politicians behaving badly: Vice President Dick Cheney accidentally shooting his own attorney; sexual harassment allegations leveled at 2012 presidential candidate Herman Cain (accusations I had completely forgotten about); the corruption conviction of former Illinois Gov. Rod Blagojevich; Idaho Sen. Larry Craig’s arrest for “lewd conduct” in 2007; Christine O’Donnell, the Tea Party candidate for the U.S. Senate in 2010 who admitted she practiced witchcraft; and former New York Gov. Eliot Spitzer, who resigned in 2008 after he was revealed to be a regular customer of a high-priced prostitution ring.

Conspicuously missing: President Clinton’s dalliance with Monica Lewinsky that led to his impeachment. Also: The Anthony Weiner scandal, which didn’t make the list, but is discussed anyway.

The inclusion of Spitzer is especially timely given the news that he was allegedly at it again this past weekend at the Plaza Hotel in New York. However, this episode of “Join Or Die” was taped long before this latest incident, so it doesn’t come up for conversation.

It will likely be the subject of various jokes on the other late-night shows this week, however, which means “Join Or Die” will find itself behind the curve on this one when it debuts on Thursday.

In the second episode of “Join Or Die,” the panel -- Chris Hardwick, host of “@Midnight” on Comedy Central; Jordan Carlos, a comedian seen on “The Nightly Show with Larry Wilmore” on Comedy Central; and someone identified as “Science Bob” -- will parse the inanity of medical practices and beliefs that have long been debunked. These include: bloodletting for the purpose of treating diseases; using mercury to treat various ailments; lobotomies; pulling teeth to treat infections; the health benefits of smoking; and the drinking of urine for medical purposes.

I had never heard of this last one, but predictably, the subject of consuming human waste water becomes a hot topic for juvenile discussion on the show. For me -- and I suspect for others -- the prospect of listening to a discussion about urine-drinking will not serve as a lure for sampling this show at 11:30 Thursday night when there are so many other shows to watch at that time. Instead, it will likely repel viewership -- which leads to a question I ask myself often when mulling over the characteristics and attributes of new TV shows: Hey, [fill in blank with the word “producers” or name of network], what were you thinking?

Each episode of “Join Or Die” starts with a five-minute monologue delivered by Ferguson in the same off-the-cuff style he adopted to great effect when he was the host of “Late Late Show” on CBS. It doesn’t work as well here, perhaps because he’s delivering his monologues now in the context of the History Channel, which is a whole different environment than late-night on CBS.

The fact is that viewers seeking comedy weeknights at 11 have plenty of other choices -- “The Daily Show,” “Conan,” “Seinfeld” or “Big Bang Theory” reruns, your local news. One option that no one has at that time is a bright, engaging talk show for history buffs -- which doesn’t seem like such a terrible idea for a network known as the History Channel.