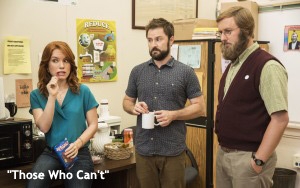 Two sitcoms on two different networks are taking basically the same approach to their depiction of teachers.

The parallel concepts: Take a group of teachers and have them behave immaturely and irresponsibly as if they’re still teenagers. In one of the sitcoms -- “Those Who Can’t” on TruTV -- this means the teachers behave like the high schoolers they’re teaching.

In the other show -- “Teachers” on TV Land -- the teachers, a group of women, act like high-schoolers, but they’re teaching in an elementary school. The women teachers in “Teachers” reflect TV Land’s focus on women as a target audience (also reflected in another TV Land sitcom, “Younger,” in which a 40 year-old woman tries to pass as a 26-year-old to improve her prospects of employment).

The teachers in “Those Who Can’t” (a title derived from a quotation attributed to George Bernard Shaw: “Those who can, do. Those who can’t, teach”) are all men, except for an attractive school librarian -- a reflection of TruTV’s traditional focus on male audiences.

Both shows indicate that TV comedy is alive and well, although the state of situation comedy is frequently lamented by commentators who never seem to tire of writing various obituaries for the sitcom.

The facts of the matter paint a different picture. While it’s true that some sitcoms have a tendency to come and go rather quickly, most notably on broadcast TV and specifically and most noticeably on NBC, comedy on TV is far from dead.

Whether they suit your particular tastes or not, some of the most successful shows on TV right now are comedies that throw off revenue in the hundreds of millions of dollars -- “The Big Bang Theory,” “Modern Family,” “Two Broke Girls” and any others that are still producing first-run episodes while enjoying a ubiquitous second life in syndication. (The next one of these will be Tim Allen’s ABC sitcom “Last Man Standing,” which will be turning up all over the place in rerun syndication this year.)

In addition, scripted comedies of all sorts can be found on cable -- from “Veep” and “Silicon Valley” on HBO to the police spoof “Angie Tribeca” on TBS and the comedies on TV Land and elsewhere.

In addition to “Teachers” and “Younger,” TV Land also has “The Jim Gaffigan Show,” a show built around a successful comedian’s life and stand-up act that in any other era would have headed straight for one of the broadcast networks. In this case, the networks’ loss is TV Land’s gain.

The same can be said for “Teachers” and “Those Who Can’t.” The appeal of both shows depends on one’s individual taste. But generally speaking, they’re both comedies that a broadcast network might have done well with, although a network exec in charge of comedy development might complain that they don’t exactly fit broadcast TV’s comedy mold.

That’s a shame because “Teachers” and “Those Who Can’t” are both well-made and smartly written (the Colorado high school in “Those Who Can’t” is named for Utah Sen. Reed Smoot, best-known for his co-sponsorship of the Smoot-Hawley Tariff Act of 1930, and the school’s sports teams are known as the Tariffs).

Both shows are funny too, which is really the whole point. “Those Who Can’t” represents TruTV’s first-ever scripted comedy -- which indicates that TV comedy is far from dead. On the contrary, it is very much alive and, seemingly, more so than ever.