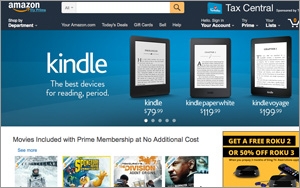 A new national survey shows that overall, America’s satisfaction with almost all shopping experiences — including e-commerce — is on the decline. But Amazon, Nordstrom, Trader Joe’s, and Wegmans continue to shine in the latest American Customer Satisfaction Index for retail.

Satisfaction levels had been higher for the past two years. But this year, overall, retail experiences slipped 2.6% to an average of 74.8 on a 100-point scale, close to their long-term average. Every category except for gas stations suffered a dip, with drug stores taking the biggest dive, followed by supermarkets, according to the Ann Arbor, Mich.-based company.

E-commerce continues to earn the highest satisfaction scores, with Amazon again ranked No. 1, with a score of 83. But overall, the category slipped 2.4%. And every company registered a lower score than last year. Amazon was followed by Netflix, Newegg, eBay and Overstock.

Drug stores saw the biggest dive. And supermarkets also did poorly, with the average score for the category falling almost 4% to 73, a 10-year-low. Wegmans, Trader Joe’s, H-E-B and Publix did well, with Giant Eagle, Wal-Mart and Albertsons doing worst. The biggest drops, though, came in Target’s food departments, which sank 12% to 71, followed by Whole Foods, falling 10% to 73.

Consumers say just about every aspect of food shopping has become worse this year, with staff courtesy and helpfulness, quality of pharmacy services and checkout speed among the biggest casualties.

In the department and discount store category, Nordstrom still reigns supreme with a score of 82. Dillard’s scores an 80, followed by Kohl’s, 77, Target, 75, and JC Penney 74. Sears and Walmart are the lowest scoring.

In the category ACSI calls specialty retail, Costco and L Brands, owner of Victoria’s Secret, came in tops at 81. And in home improvement, Lowe’s and Home Depot came within a point of one another, their closest scores in the last five years.

For clothing companies, TJX, owner of both Marshalls and TJMaxx, ranks first at 78.

The ACSI is based on interviews with 9,358 customers, surveyed via email.