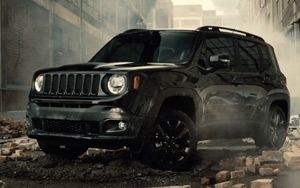 Like it or not, Fiat Chrysler Automobile loves the movies. In recent years, the automaker has been heavily involved in films in terms of placement and sponsorship. The company’s off-roading brand is going down that road again with sibling Dodge to support Warner Bros. Pictures’ Batman v Superman: Dawn of Justice, premiering March 25.

Fiat Chrysler says the cross-branded effort for the movie, which was shot in Detroit, includes product integration with vehicles from FCA’s Jeep, Dodge, Chrysler, Fiat, Alfa Romeo and Maserati brands, and branded ads for Dodge and Jeep.

Chief Marketing Officer Olivier François says FCA’s commercial-vehicle unit, Iveco, has products in the film as well. “With much of the film's production taking place in our own backyard of Detroit, our ability to creatively collaborate with the WB team reached new heights. The product integration was so organic to the filmmakers' vision and storyline, all we had to do was incorporate scenes from the movie for our commercials.”

The effort also involves a special edition vehicle, the 2016 Jeep Renegade Dawn of Justice Special Edition car. The campaign kicked off Feb. 22 with a 30-second TV and digital spot called “Into the Storm.” The ad shows footage from the film, including Ben Affleck (as Bruce Wayne) behind the wheel of the special edition Renegade. Like a recent campaign for the U.S. Marines, the ad is about moving toward danger, not away from it.

In an urban-warfare mise-en-scène, Wayne swerves past abandoned cars, roadside bombs, and air support as actor Jeremy Irons (Alfred) narrates the zeitgeist: "You're not afraid. You like chaos. The madder, the better.” Continuing with language likely cribbed from a Donald Trump speech, he adds: “And in these times, we need that. We need you to rush in when everyone else is running away.” The Dodge spot, a 15-second chase-scene ad, comes mid-March. The ad, featuring the Dodge Challenger and Dodge Durango makes the vehicles villain cars.

Jeep had Wranglers in last year’s Jurassic World, a movie overgrown with brands that choked it like kudzu. And while Dodge was not actually in the new Star Wars movie, both that brand and Jeep were sponsors, and ran dedicated advertising, with Jeep touting its Cherokee and Dodge its Viper and Charger cars. In the Super Bowl, Jeep waxed poetic to talked about Jeep’s military, adventure and rugged individualist heritage.