February Is Looking Good For Automakers 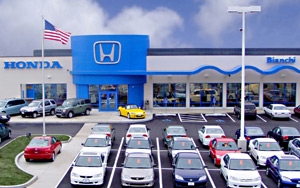 As long as gasoline prices are low, there is no stopping “go” when it comes to car sales. Thanks to compact cars and SUVs, autos have been moving off lots as fast as they come in, and they might as well keep the engines running this month, too.

The bad news? Compacts notwithstanding, cars aren’t cutting it. According to J.D. Power and Associates, and its LMC Automotive unit, market share for cars in February is only 42%, the lowest level on record for the month.

Still, the market research company predicts an 8.1% increase in sales this month versus last February, with the month posting 1,046,700 vehicles moving off lots, up from 968,316 last year.

According to J.D. Power, consumers may spill as much as $32 billion this month on new vehicles, nearly $3 billion more than in February last year. If so, consumers will, for the first time ever, spend more than $30 billion in the month of February.

Another record: the extent to which they are opting for leasing and long-term loans. So far this month, leases and loans of 72 months or longer combine to represent 65.1% of all retail sales, a record level for any month, per the firm, which says the previous record was set in January 2016 at 64.3%.

But while selling days are equal, circumstances are not, and that, says John Humphrey, SVP of global automotive practice at J.D. Power, has some influence on the year-over-year differential. “The year-over-year sales growth projection for February is strong, but we need to keep in mind that it is aided by the fact that sales in the upper East Coast, Midwest and Texas were hampered by weather last February.”

When February’s likely retail sales outcomes are extrapolated for the full year, the seasonally adjusted annualized rate of sales (SAAR) is a solid 13.9 million units, versus 12.8 million units last year. J.D. Power says it is the strongest retail SAAR in the month of February since 2002, which was huge, at 14.7 million units. Again, a note of caution from Humphrey, who warns that, while a 13.9 million retail SAAR is unquestionably a high level of vehicle demand, “It is the lowest monthly level since last June and well below the 15.3 million pace last September.”

Compact cars lead for the second consecutive month, driven, in part by activity in the sector: the more new vehicles, the more marketing, the more attention, the more sales. J.D. Power would add high incentives to the formula, because car companies are adding spiffs to fuel sell-down of the late models that are being replaced by new cars, “while all-new or redesigned models revitalize interest in the segment,” says the firm.