EA's Plants Get Back Into Action 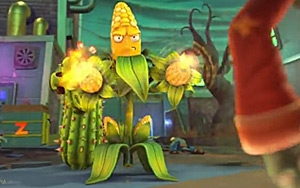 In the world of “Plants vs. Zombies,” the zombie apocalypse had already occurred. But have no fear, the plants are ready to fight back.

In marketing touting the release of “Plants vs. Zombies 2: Garden Warfare,” EA’s sequel of the first-person console shooting game (that is also part of the popular mobile game franchise), the plants are in full Rambo rebuild mold, wooing their aging hero out of retirement to reclaim “Zomburbia.”

“A lot of people are familiar with the mobile game,” Naomi Duckworth, senior art director at EA’s agency, Heat, tells Marketing Daily. “We wanted to treat [this game] like a Hollywood blockbuster.”

The Hollywood-esque strategy follows similar paths laid out by Heat for other EA games, including “Madden” and “Star Wars: Battlefront.” Having already launched teaser trailers, a full-on preview outlines a story that wouldn’t be out of place in an 80’s (or 90’s) action film. In the new spot, a military officer heads to a remote farm where a man peacefully plays a harmonica in the shadows. After an exchange about being retired from fighting, the figure is revealed to be “Colonel Corn,” the hero of the new game. Thus begins a lengthy training montage, with familiar scenes such as cutting one’s beard, doing sit-ups, honing tools and practicing against target dummies. The spot ends with game-play action shots and the tagline, “Bigger. Badder. Bigger.”

“We were drawing from the spirit of the game itself,” Duckworth says. “It’s a weird game, and we created a real-life version of the Corn Colonel who appears in it.”

The game launches this week, with the spot running digitally until its broadcast premiere during the Kids’ Choice Awards on March 12. The game is the rare first-person shooter that is also kid-friendly, which explains some of the commercial’s humor, says Jon Korn, senior writer at Heat.

“Our hope was to make it for everyone,” Korn says. “If you had no idea of what we were talking about, at least you’d be intrigued. It’s a game everyone can play.”