Roll Over, Beethoven -- History Channel Is In The Comedy Business 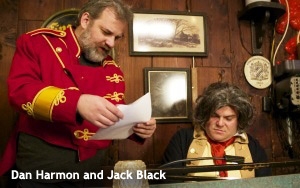 If you’re getting the impression there’s a comedy glut on TV after 11 p.m., then you would be right.

There is a comedy glut in late-night TV -- from the late-night talk shows on the networks and snarky newscast parodies on Comedy Central to the syndicated sitcom reruns seen all over the place.

Maybe it’s because the powers that be in TV have long come to the conclusion that people don’t want to think too much in the hour or so before they go to sleep. Instead, they’d rather have a laugh or two. Of course, whether all the intended comedy is actually funny is a matter of individual taste.

Enter the History Channel, which is now experimenting with comedy shows of its own on Thursday nights starting at 11 o’clock (Eastern). Last week saw the debut of “Join Or Die with Craig Ferguson,” a comedic talk show featuring panel discussions about historical subjects moderated by the former host of CBS’ “Late Late Show.”

And this Thursday -- last night, as a matter of fact (Feb. 25) -- History introduced another half-hour of comedy following “Join Or Die” that is nothing if not innovative. This half-hour of comedy content -- titled “Night Class”and set to air from 11:30 to midnight Eastern on Thursday nights -- consists of three separate short-form shows.

They all have a history “hook,” but they are not to be considered educational. The three short-form series are: “Great Minds with Dan Harmon,” “The Crossroads of History” and “How To Lose the Presidency.”

Harmon -- the creator and star of “Great Minds” -- is the former producer of NBC’s “Community” who made headlines during the show’s run for his public clashes with one of the show’s stars, Chevy Chase, and executives at Sony Television, which produced the show.

He’s a colorful guy who I got to see in-person last month at NATPE 2016 -- the annual TV programming conference in Miami Beach. Harmon was on a panel whose topic was brand integration in TV comedy. The other panelists were a group of chief marketing officers and another producer of TV comedy, Mitch Hurwitz, creator of “Arrested Development.” Harmon and Hurwitz were so opinionated, outspoken and hilarious that they stole the show -- especially Harmon, who came across like a force of nature.

In last night’s premiere of his short-form “Great Minds” series on History, Harmon was seen operating a time machine that was capable of plucking Ludwig van Beethoven from the past of 200 years ago and plunking him down in the present day. Then, Harmon and Beethoven -- played by Jack Black -- went to a German restaurant in L.A., where they had a discussion about Beethoven’s music.

During this 10-minute “show,” we “learned” that Beethoven intended all along for all of his symphonies to have lyrics. Black -- a musician and actor who played the role of the composer with his usual exuberance -- then sat at a piano and sang lyrics that were all about poop. Up until this point, I had been enjoying this short-form thing, but the poop song left me cold. I know: Readers of this TV blog have heard variations on this before, for which I apologize. But there it is.

On an installment of “Crossroads of History” that the History Channel provided for preview, John Wilkes Booth was seen brooding in a bar near Ford’s Theater in Washington apparently during the intermission of “Our American Cousin.” He then had a chance encounter with an exuberant bar patron who turned out to be Lincoln’s clueless bodyguard, who had snuck away from his post outside of Abraham Lincoln’s theater box for an intermission drink of his own. And the rest, you might say, was history.

This segment was marginally easier to take than the “Great Minds” show, although I expect (or at least hope) that future “Great Minds” segments won’t veer off into the lavatory of low expectations like the Beethoven segment. I will also admit that, other than the unfortunate choice of lyrics about pooping, this Beethoven segment was funny, and so was the Lincoln bit.

One of their attractive features was their 10-minute length -- which seems purposely designed not only for TV play, but for other platforms as well where short-form content is prized and more to the point, easily consumed. It’s an innovative idea that might turn out to be historic.

tv
1 comment about "Roll Over, Beethoven -- History Channel Is In The Comedy Business".
Check to receive email when comments are posted.
Next story loading