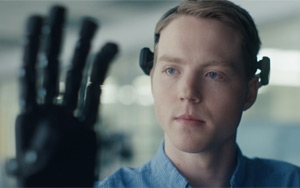 Cadillac launched its “Dare Greatly” campaign during the Oscars last year. During this year’s Oscars this weekend, the automaker is launching the next chapter of the campaign, with a “Don’t You Dare” message.

Cadillac, which this year fills at least one gaping hole in its product lineup left by the retired XTS crossover, is launching the new messaging with a quartet of ads during the 88th Academy Awards, and a pair of ads before the show. In addition to touting the brand idea, the spots also showcase the new XT5 crossover and the CT6 saloon.

The spots -- with the idea that achievers achieve despite general censure and skepticism about their projects -- showcase eight young people, including  Kenneth Shinozuka, a wearable tech designer; Easton LaChapelle, who developed a brain-powered prosthetic limb; Laura Deming, a 14-year-old MIT student working on life-extension  therapies; Flynn McGarry, a teenage chef; national chess master Justus Williams; and Laura Deming, a biotech prodigy who was at MIT at age 14 (yes, we can just quit life now). In the ads, each of them mocks mediocrity with lines like, “Don’t you dare play with your computer all night,” and “don’t you dare play with your food.” Publicis Worldwide handles creative duties for the brand.

Cadillac says it will have a total of five-and-a-half minutes of airtime, before and during the awards show, including four minutes during the show. There will be a total of six spots, all directed by an Oscar winner, Janusz Kaminski, who took statues for his camera work on "Schindler's List" and "Saving Private Ryan."