The Return Of David Hasselhoff: One Man Making A Difference 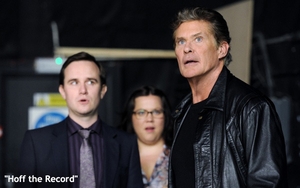 It happens every five or six years: You’re going along, minding your own business, and suddenly two separate pieces of press material come your way on the same subject -- David Hasselhoff.

This happened to me recently, followed by the same kinds of questions that always leap into my brain every time I’m more or less forced to contemplate the cult of Hasselhoff: What is with this guy? What is the secret to his enduring appeal? And, if we have to have a TV personality running for president, why couldn’t it be the Hoff instead of Trump?

Two things are happening on the Hasselhoff front. The first of the two announcements came in the mail a week or two ago in the form of a press release accompanied by a DVD. This package came from the channel known as AXS TV, which is not available on Time Warner Cable where I live in New York.

This network was once known as HDnet -- a network founded in 2001 that attempted to position itself as a destination for high-definition TV shows at a time when high-def was not yet standard or even widespread. Today, everything’s in high-def. So HD rebranded itself AXS TV in 2012.

Mark Cuban is credited as its founder. In addition, some people might know HDnet, and subsequently AXS, as the place where Dan Rather went to work after he left CBS.

Rather is still there, and his next big interview is with David Hasselhoff. This one is due to air a week from Saturday (on March 26) at 3:30 p.m. Eastern (yes, in the middle of a Saturday afternoon).

The following Thursday night, the network will premiere the six-episode faux-documentary series called “Hoff the Record.” This was a show -- combining elements of scripted and improvised comedy -- that was made and aired in the U.K. last year. Its story line has a semi-fictionalized version of Hasselhoff -- played by Hasselhoff -- traveling to England to audition for a movie about himself.

In the show, Hasselhoff’s career has hit a dry spell. You might say that the Hoff -- the star of “Knight Rider” and “Baywatch” -- is trying to make a comeback in “Hoff the Record,” which would make this show sort of similar to Lisa Kudrow’s HBO series “The Comeback.” For the record, hers was much better.

In real life, Hasselhoff might not be starring these days in any iconic TV shows. But I read somewhere that he was a part owner in “Baywatch” and as a result, personally amassed a fortune of around $100 million.

Still, he persists in these occasional returns to TV. He’s also showing up on the NBC-owned diginet known as Cozi TV, one of several such digital subchannels that specialize in airing old TV shows.

Cozi happens to have both “Knight Rider” and “Baywatch” in its lineup, so it’s not surprising that the network is cozying up to Hasselhoff. Cozi’s Hasselhoff programming -- titled “Hoff-a-Minute” -- is styled as a series of news updates from the “Hoff News Bureau” that will “report” on what the Hoff is doing at any particular moment.

The reports -- which start tomorrow (Saturday, March 19) at noon Eastern -- will be anchored by one of Hasselhoff’s daughters, Taylor-Ann (also seen in E!’s “Rich Kids of Beverly Hills” reality series). In the Cozi press release, Taylor-Ann is described as a “TV host, musician and entrepreneur.”

If memory serves, attempts to jumpstart Taylor-Ann’s music career formed the basis for the Hasselhoff family’s foray into reality TV in 2010 -- a show called “The Hasselhoffs” featuring David, Taylor-Ann and another daughter, Hayley. Only two episodes of the show aired before it was yanked by A&E, never to be seen again.

Taylor-Ann is well-qualified to “report” on her father’s life. She was the one who shot and then publicized the infamous video of her inebriated father shirtless and on the floor drunkenly eating a cheeseburger in 2007 when she was 17.

“You won’t believe what it’s like to hang out with David Hasselhoff until you see it for yourself,” says Taylor-Ann in a prepared statement in Cozi’s press release. “Everywhere he goes, everything he does, turns into an adventure. And we’ll be there to capture it.”

Well, maybe that’s true some of the time. I spent a few hours in the company of Hoff and both of his daughters in 2010, joining them for lunch in Manhattan one day as they roamed around town promoting their reality show (the one that disappeared in two weeks).

Nothing adventurous took place during our lunch, although Hoff and his daughters were very nice company. This was during another sudden outburst of Hasselhoff-related activity on TV, including his appearance that year as a contestant on “Dancing With the Stars.”

So at lunch, I asked him straight up: “What is so fascinating about you? Is it all because of ‘Knight Rider’ and ‘Baywatch’? I mean, really?”

"'Baywatch' had the same characteristics as 'Knight Rider' -- one man can make a difference," answered the Hoff, who had evidently given this some thought. “It’s why I think people watch 'Dancing with the Stars'," he continued. “They wanna feel good, they wanna root for somebody, they want somebody to get up off that dance floor, get off the damn mat and take control of their life.”

Enjoy this Hasselhoff moment while it lasts.

tv
3 comments about "The Return Of David Hasselhoff: One Man Making A Difference ".
Check to receive email when comments are posted.
Read more comments >
Next story loading