Yahoo released data this week to help marketers gear up for spring trends, from DIY home improvements to planting a vegetable garden or Rose or Gardenia plant. Some of the more interesting findings show a correlation between tax day and a willingness to view advertisements, along with the correlation between furniture and cars.

Spring also means tax time. With April 15 approaching, Yahoo sees an increase in mobile searches for "tax prep." In 2015, one in four searches on "tax prep" were done on a mobile device, and that trend is expected to continue.

Those searching on the term "tax prep" tend to be receptive to ads. In fact, they are twice as likely to click on an ad compared with the average Yahoo user.

"Tax prep" searchers skew age 35 and older, and are more likely to live in a household with an annual income below $75,000.

Search related to "online / software tax prep" solutions start well in advance of the general tax preparation season, but while software searches slow down after tax season, general tax searches are sustained through the year.

Yahoo said the top search-related questions during March and April are typically "When are taxes due?" followed by "How to file taxes?" In April the question shifts to "How to file and extension on taxes?"

Helping marketers find consumers, Yahoo examined search trends from spring 2015 and between February and March of 2016 to understand which products and activities are top of mind. The results offer advertisers a look at searches to help polish spring ad campaigns.

It clear that consumers in spring focus on home improvement. Consumers are fixing up their home, doing it themselves. January, March, and April are peak months for searches containing the phrase "how to build," specifically in the Southeast, according to Yahoo. This year building sheds, tree houses, workbenches, decks, and raised garden beds are top of mind.

Brands like Sears and Wayfair take advantage of searches based on "building," optimizing for sales on storage sheds.

Interestingly, the same search phrase "how to build" on google.com returns a video for "Minecraft on how to build little wooden house," followed by another video on YouTube, "How To Build A Safe With LEGOs."

On bing.com, the phrase "how to build" returns eight videos followed by a listing from HowStuffWorks.

Along with spring comes allergies. Searches for allergy relief increase between late February and early June, and those searches are 10-times as likely parents, suggesting those searches may want help for the entire family, according to Yahoo.

Along with spring comes allergies. Searches for allergy relief peak between late February and early June, and those searches are 10-times as likely parents, suggesting those searches may want help for the entire family, according to Yahoo. The most searched-on question is "when do seasonal allergies end."

Searches for "grills" also pick up in March and peak in May. So far in 2016, searchers in Oklahoma show the strongest interest in grills, per Yahoo, which also notes that Adirondack chairs pick up in March and peak during April. It turns out that consumers searching for "Adirondack chairs" are actually 58% more likely than the average Yahoo user to drive a luxury SUV and nearly three times as likely to buy sporting goods. 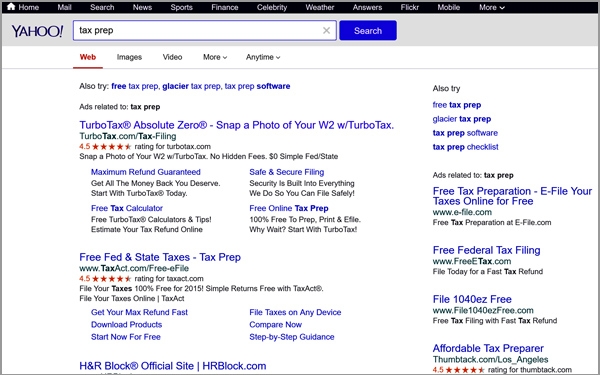