Search On Apple's Smaller Screen Works For Me -- What About Google's Bots? 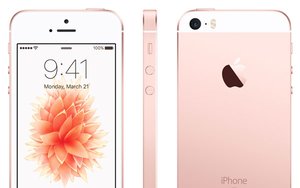 Apple announced a smaller screen for the iPhone Monday. I'm pretty happy with the decision.

Google makes it easy to query a search with your voice, and I'm finding the engine continues to improve, returning the most relevant queries at the top of the page.

The smaller SE -- a 4-inch iPhone -- needs to fit in my wristlets, which the iPhone 6 cannot. I'm due for a new phone, and while it may seem silly, I'm not going to buy one I cannot neatly store in a small wallet. I'm not a big-purse kind of person.

Apparently, a chunk of Apple customers feel this way too. They want a smaller iPhone. Many have resisted upgrading to the recent 4.7-inch and 5.5-inch smartphones.

Data from Applovin finds that nearly 40% of global iPhone owners have an older device with a screen size of 4 inches or less. The new phone has the same screen as the iPhone 5S, Apple's last 4-inch phone released in 2014, but has the same processor and graphics performance as the iPhone 6S.

Earlier this month, reports surfaced that Google changed the dimensions it uses to render text and images on mobile screens -- and that Google's Web crawlers that index information and rank sites for searches began using the Nexus 5X as a mobile standard for rendering images and text on mobile screens.

What does that mean for iPhone users who want the smaller screen? Googlebot identifies itself as a certain type or class of device to determine how it will present the information to the user of the phone. The decision includes some of the basic capabilities of a device such as the screen size. In prior years, the Googlebot identified itself mostly as an iPhone running iOS 8.3, according to The Guardian.

Many sites, including The Guardian, ignore these "user agents" and serve one "payload" to the user's device, dynamically resizing and formatting depending on the available screen real estate and size. A smaller screen size could make a difference in the future if the user uses a Google app to search and read news or directions on a smaller screen size.

Applovin analyzed iPhone use in February across its network, which serves billions of ad impressions per month. The company has the ability to see each ad request and the model of the phone being used. In a sample of data from its network to determine the mix of active users by model it found about 63% of iPhone 6 or 6-plus or newer, 4.7-inch or larger, ran across Applovin's network, with the iPhone 5S or older, 4-inches or less contributed to the remaining traffic.

Interestingly, Applovin calculated some numbers to determine how many consumers, similar to me, have been dragging their feet because they didn't want to upgrade to a larger phone. Applovin estimates Apple has sold roughly 500 million iPhone units in the last 30 months. About 400 million are probably still in use. So what's the possible market for upgrades?

"If you extrapolate from our data, 151.7 million of those are smaller-screened, older iPhones," according to the report. "Round that down to 150 million. If we estimate conservatively that 80% of those smaller iPhones are used by price-sensitive customers who can’t afford a newer model, that still leaves about 30 million customers who would be interested in buying a compelling iPhone SE model with a 4-inch screen."

Apple's move to reduce the size of the screen could easily increase iPhone sales by 33% year on year, according to Applovin's estimates. The calculation assumes that about 30 million buy an SE within the first 90 days of April 1, 2016. The 33% increase in iPhone sales due to the new SE model is a conservative estimate.