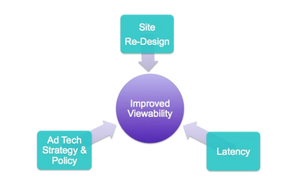 The primer, focusing on site design, ad tech and operational strategy and policies, outlines a range of tactics for publishers including working with a third-party vendor or using an internal measurement system as a "source of truth" that can be used as a baseline and in testing and iterating. It's available for download here.

A mere 46% of digital ads were viewable in 2015, about the same as the year before, according to research from Viant. The research also found that major media brands including CBS and CNN had a 71% viewability rate for 2015, an improvement from 2014's 67% average. (Read more.)

"When publishers create the necessary changes, the marketplace does respond and the rewards do follow," reads a summary concluding the primer. "It is absolutely essential that publishers deal with partners in a transparent way."