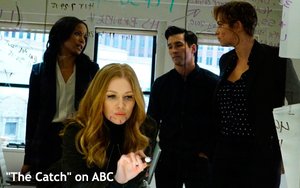 Blame it on “The Sting.”

That 1973 film -- the Oscar winner that year for Best Picture -- would seem to be the forerunner of all the con-game movies and TV shows that have come our way ever since.

And some of these still beg the same question that arose in the ’70s after you went to see “The Sting” and then wondered some time later if the con Robert Redford and Paul Newman played on the Chicago mobster played by Robert Shaw was even profitable. It was so elaborate, and employed so many people, costumes and locations, that it looked like it probably earned a profit of about two cents.

Here in the present day, the con artists of prime-time TV use sophisticated cyber methods to separate marks from their billions. In TV’s newest con-artist show, “The Catch” -- premiering Thursday night on ABC -- mere computers are not enough (nor would it make for an exciting TV show just to watch people stare at computer screens).

Instead, this show’s team of sophisticated con artists also maintains an elaborate office in an expensive L.A. office building, use very expensive cars and take many months to let their scheme unfold.

In “The Catch,” this involves a suave and handsome con man named Christopher Hall (played by Peter Krause) wooing and bedding the attractive head of L.A.’s best firm of private investigators in order to gain inside information about the firm’s super-wealthy clients in order to steal from them. The wooing and bedding is so effective that the sexy L.A. investigator, Alice Vaughan (played by Mireille Enos, looking a lot more glam than she did in “The Killing”), falls head over heels for her con man, to the point that the two are engaged to be married when the con gets played.

Will the con man and his cohorts make off with all the money in the firm’s clients’ bank accounts -- ruining the firm and its clients alike? Well, since I watched the premiere episode the other day, I think I know the answer, but would rather not act as a spoiler here in case some readers wish to watch this show on Thursday night.

But that’s not the only reason I’m not answering the question. The other is that I’m not sure of the answer. That’s the thing about TV shows like this: Sometimes one’s feeble brain cannot really get around all the antics these people pull at such breakneck speeds.

One of the things that has long struck me about many modern TV dramas -- going at least as far back as the heyday of “24” on Fox -- is the speed at which the nimble-fingered computer whizzes on TV seem capable of finding vital, life-saving information online (blueprints of buildings, the locations of bad guys and the like) and/or hack into bank accounts and transfer billions of dollars out of them faster than the proverbial blink of an eye.

This stuff happens on “The Catch” as well, with one faction trying to steal the money while another is engaged in trying to stop them. The deciding factor doesn’t come down to their respective ingenuity. It’s more about typing speed -- whoever opens their laptop, and then types the fastest, wins.

In “The Catch,” it’s all in a day’s work in “the dangerous and sexy world of international crime,” as ABC’s p.r. boilerplate describes this show’s milieu (note: This is the first time I have ever used the word “milieu” in any TV column or story -- and I have written more than 6,500 of them over 30-plus years).

Is the world of international crime really sexy? As usual with these kinds of TV shows or movies, you are expected to take their word for this. At some point during the premiere episode of “The Catch,” it is suggested that the suave con man has already cut a dangerous and sexy swath of sophisticated con-playing all across Europe, so the “international” point is made.

This information comes from a man with a West African French accent claiming to be an FBI agent who persuades Alice that they should join forces to nab Christopher. This is one of the wrinkles established in the series premiere that adds yet another layer to a scenario that already has more layers than an eight-layer cake.

I suppose that the writers of a show like this one must figure that the more layers they lay on, the more stories they’ll get to play around with as the series unfolds. Whether or not they will get the episodes they need to sort it all out is anybody’s guess.