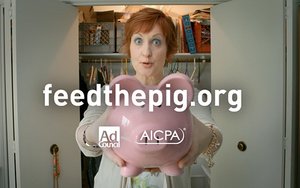 Having successfully partnered with Facebook for their “Feed the Pig” campaign, the American Institute of Certified Public Accountants (AICPA) and the Ad Council are looking to reach more young adults with new collaborations.

The effort, which tries to introduce Millennials to the importance of saving for the future, includes the production and distribution by the Facebook Creative Shop of three videos and a series of still images that are promoted via carousel and linked page ads. According to the principal players, the campaign garnered a reach of nearly 14 million, the videos were viewed more than 4.7 million times and the effort drove 189,000 unique clicks to the campaign Web site.

“The good news is that Millennials are internalizing the message that saving is important, but they still need help creating habits that stick,” says Ad Council president and CEO Lisa Sherman in a release.

The Feed the Pig Web site offers a range of interactive tools including calculators, podcasts and free subscriptions to weekly saving tips via email and text message to help foster positive saving habits. To date, the campaign has received more than $382 million in donated media through the Ad Council’s model.

According to a new survey by AICPA and the Ad Council, one in three Millennials (34%) ranked saving as their number one goal for the year -- ahead of living a healthy lifestyle (20%), paying off debt (19%), and losing weight (14%). But while saving was a top priority, a majority of Millennials attributed their lack of saving to impulse buying (65%).

In addition to impulse buying and lack of budgeting, an overwhelming majority of young adults say that their current salary (84%), having too many bills (81%), paying down debt (79%) and not establishing a personal budget (62%) are impediments to saving more. Regardless of the reason, almost half (44%) of those surveyed did not pay their full credit card balance each month or borrowed money from friends or family. Forty-one percent had less than $100 in their checking account, 30% paid a late or overdraft fee, and 23% missed a bill payment.