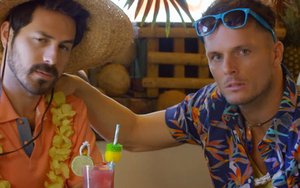 And what better way to appeal to guys than a combination of irony and wild partying?

The new social campaign, from 360i, encourages guys to become “Malibros”—men who are so confident about their masculinity that they aren’t afraid to flaunt their love of Malibu and fruity cocktails using the rum.

A 60-second video, released initially on Facebook to coincide with spring break, shows a guy in a resort bar whispering as he orders a Malibu rum cocktail, only to be joined by another bro who says he was also about to order the drink. After bonding, the two throw themselves into a hedonistic beach party.