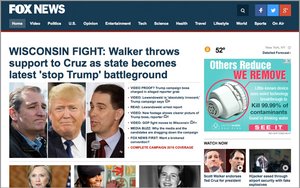 Fox News Channel -- and other cable news networks -- witnessed sharply higher TV viewership in the first quarter, with Fox topping all cable networks in many categories.

Fox News Channel soared 38% in total prime-time viewers to average a Nielsen 2.37 million viewers. A year ago, it had 1.74 million in prime time, fourth-highest among all cable networks. Fox also bested all networks in total day viewership with 1.35 million.

CNN more than tripled its viewership in prime-time -- up 165% to 1.42 million viewers versus 535,000 for the same period a year ago. CNN, which was in 30th place among all prime-time networks, moved up to sixth place overall.

Only three of the top 12 cable networks grew in TV viewership. Those non-cable news networks include HGTV and FX.