Eye-Opening TV Tour Of 10 Historic Homes In One Hour 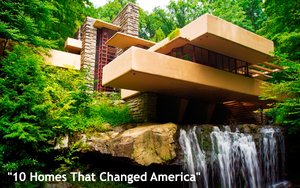 Who doesn’t love a great house tour? Here are 10 of them in a single hour.

The title of the show is “10 Homes that Changed America.” The title seems worded purposely to be flexible. It’s not the 10 homes, nor is it the Top 10 homes. It is merely “10 Homes” ranked not in order of importance, but chronologically -- perhaps to prevent the kinds of arguments and debates that could erupt over the choice of this one, or the omission of that one, or the ranking of one of them over another one.

Architecture experts might engage in such debates anyway, but for the rest of us, this show -- premiering Tuesday night on PBS -- is an eye-opening and very pleasurable tour of 10 examples of housing that were chosen for the manner in which they influenced and advanced the evolution of home-building and design in America.

The show makes a compelling case for each of their positions in architectural history, although whether or not they “changed America” generally is the one aspect of this show that would seem to be ripe for argument. In the case of this show, however, arguments and debates would simply spoil a good time. This was such an enjoyable experience to preview that I wished the producers had extended their list to 20 homes in two hours.

This show comes from the public TV station in Chicago -- WTTW -- which is providing it, along with two other companion shows, to PBS.

The chronological list starts with the 1,000 year-old adobe Taos Pueblos in New Mexico and ends with the contemporary “Glidehouse” -- prefab homes that generate their own energy and use sustainable materials.

In between these two are a group of historic homes ranging from the famous to the not-so well-known. Of the former, there is Frank Lloyd Wright’s Fallingwater, pictured above. Of the latter, there is the 1908 Gamble House in Pasadena, built for the family of one of the founding partners of Procter & Gamble and said to be the forerunner of all of the arts-and-crafts bungalows that came after it.

The Gamble House segment is one of the many reasons to glue yourself to this show, for this is a house interior that is not be missed. Almost every element in it -- from the furnishings to the stained glass windows -- were handcrafted based on the design of architects Charles and Henry Greene. These include a custom-made upright piano that has to be seen to be believed.

Even the segment on Fallingwater, which has been the subject of so many documentaries, seems to present this iconic house in new ways and from new angles. I’ve seen more than one documentary on this house before, but after watching this one, I have a brand-new appreciation for it.

The sites on the rest of the list range widely from Thomas Jefferson’s Monticello to Chicago’s flamboyant Marina City Towers apartment complex. With 10 sites to be covered in an hour, you might expect each of them to get short shrift. But they don’t. You come away from each segment fully satisfied that you’ve learned each building’s background, its purpose and its significance – and you’ve had a great time doing so.

And when you visit the 1938 Langston Terrace Dwellings in Washington, D.C. -- one of the first public housing projects in America -- you will not only be enlightened, but also moved.