Despite Futility, Watchdog Group Presses Campaign To Clean Up Airwaves 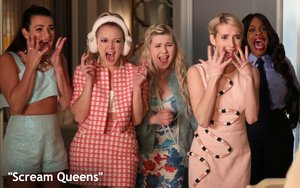 There really is no debate anymore about the appropriateness of TV program content.

All you have to do is watch a few hours of TV and you will come to the same conclusion: Anything goes these days, for the most part.

Sure, there are still certain words you can’t say on TV -- at least on some networks. And of course, sex scenes in TV shows do not yet qualify as pornography. But the barriers on language and sexual content, if not yet broken down completely, are cracking.

Just last week, a Washington Post story noted the growing use of the f-word on TV shows on commercial-supported television.

The fact that the network that had OK’d the word’s use is FX should come as no surprise. This network has long been in the taboo-shattering business when it comes to language, violence and sex. In the Washington Post story, FX President John Landgraf defended the word’s use. He noted that it has appeared infrequently and only when writers and producers felt it was necessary (most recently at key moments in FX’s O.J. Simpson “event” series “The People Vs. O.J. Simpson,” which concludes Tuesday night).

Perhaps more significantly, Landgraf -- who was quoted from remarks he made to reporters at a TV industry press event last summer -- noted that the f-word had been used before occasionally on FX shows such as “Louie” in 2014 and FX received few complaints, according to the Washington Post story.

"So we’re on the verge of being kind of done with the debate or battle over language. It's close anyway,” Landgraf said.

Well, not so fast, Mr. Landgraf. While battling back against the tide of content permissiveness seems like the 21st-century version of tilting at windmills (after all, if TV won't permit it, then the Internet will), there are still people out there willing to be Don Quixote.

Enter the Parents Television Council, the California-based watchdog group that monitors TV shows for violence, sexual content and language, and reports its findings on its Web site, ParentsTV.org.

The goal of the PTC is not necessarily to censor TV, but more to serve as a warning service for parents who, the PTC surmises, often have no idea what their children are watching.

In the opinion of the PTC, much of what children are watching is not only inappropriate for them, but the TV industry has neglected to police its own airwaves and impose protections and warnings by way of a content-rating system that the industry promised to maintain.

This is the point of the PTC’s latest study titled “Protecting Children or Protecting Hollywood: A Twenty-Year Examination of the Effectiveness of the TV Content Rating System.” On Monday, the PTC announced the findings of the study -- its seventh examination of the rating system since its inception in 1997.

Not surprisingly, the study’s conclusion boils down to this: “The TV content ratings system is inadequate for the purpose of protecting children from graphic sex, violence and profanity on television.”

The study's “Executive Summary” goes on to say that there are no longer any regularly scheduled prime-time programs that are wholesome enough to earn a G rating or even a TV-PG rating (presumably, the PTC was not counting children’s TV networks).

The study notes the increase in “graphic content” on television. Among other things, by the PTC's count, instances of nudity (much of it pixilated) in prime-time TV increased 93% between 2011 and 2014. In the study, the PTC takes pains to support its arguments with multiple examples of behavioral research that found exposure to the material the PTC studies to be harmful to minors.

The PTC contends that the rating system's main problem is that it is “administered by the very businesses it is supposed to be regulating: TV networks. The same companies create media content, rate the content, and run the board which oversees the ratings process -- a conflict of interest which would never be tolerated in any other regulatory body. Systemic reform of the voluntary, self-regulating TV content ratings system is needed.”

The complete study document is 29 pages long. It can be downloaded in full on the PTC’s Web site. Ironically, it contains a handful of graphic examples of scenes of violence and sex that the PTC apparently found necessary to include, in order to put its point across.

Among the series cited are two Fox shows -- “The Following” (which is no longer on) and “Scream Queens” -- and a handful of ABC shows: “Mistresses,” “Secrets and Lies” and the short-lived “Wicked City.”