NBC's 'Game Of Silence' Is All Agony, No Ecstasy 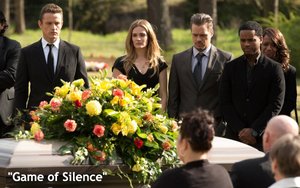 Sometimes it seems as if TV is hellbent on showing us the darkest precincts of our world and then, if you choose to stay tuned in, plunging us neck-deep into them.

Such is the case with this new NBC series premiering Tuesday night (April 12) called “Game of Silence.” This show is so grim that watching the premiere episode was about as much fun as attending a funeral.

Appropriately, there’s even a funeral in the show (it’s the one depicted in the photo accompanying this blog post). The dead person was one of a group of four grown men who were close friends when they were boys, and endured all manner of violence, torture and abuse in a Texas juvenile detention center when they were inmates there.

“Game of Silence” is about secrets and revenge. The secrets are the ones the men are keeping from their loved ones about the terrible things that happened to them during their boyhood incarceration. This period was some time in the late ’80s or early ’90s, although the show is kind of vague about these kinds of details. At one point in the premiere, the time period for the present day is given as 25 years later.

Here in the present day, the men are plotting vengeance against their tormentors, including former guards, the warden -- who has become lieutenant governor of Texas -- and assorted other inmates who have blossomed into full-fledged criminals in their adulthoods.

The vengeance begins spontaneously when one of the friends comes upon one of their former detention-center bunkmates purely by happenstance. He then beats the man senseless with a golf club, and the show’s secrets-and-vengeance story spins off from there.

Along the way, we learn some of the details about the heinous things that happened to these men when they were boys in juvie. They were beaten by guards and other inmates, forced to engage in bloody fistfights with other inmates for the entertainment of the warden and possibly, brutally raped.

This last is not yet specified in the first two episodes of the show that I watched, but it seems implicit. It’s also possible that the writers of this show are saving the details about sexual abuse for some time later in the series, just when viewers might be forming the impression that the story about what these boys went through can’t get any worse.

Among the stories we do hear is one about one small boy on a work detail who became accidentally doused in a strong, acid-like chemical solution that burned him over most of his body. Instead of rushing the writhing, suffering boy to a hospital, the sadistic warden is seen driving him away in a prison van, presumably to his death, while the burning boy cries, screams in pain and begs for his life.

For some reason, TV networks and producers serve up this kind of horrible agony again and again, pat themselves on the back for their great “storytelling” skills, and call it entertainment.

“Game of Silence” fails miserably on both scores, starting with its title. What exactly is the “game” here? There doesn’t seem to be anything even remotely “game”-like about this show’s plot.

Aspects of the story don’t seem to make sense either. For example, when we first see the boyhood friends at play, the words “Houston 1988” appear on screen. But moments later we find out it’s not Houston, but a town called Brennan that we soon learn is some 80 miles away from Houston. So why did they call it Houston?

Certainly, much of the action in the show takes place in Houston, not Brennan. Early in the premiere episode, one of the men -- who acts as this show’s narrator (a device that is mercifully kept to a minimum here) -- explains that he moved to Houston when he grew up because it was 80 miles from Brennan and he really wanted to escape his past.

I don’t know about this guy, but if I wished to escape my past, I would put more than 80 miles between it and myself. But hey, that’s just me. Suffice it to say, this 80-mile distance is not enough to put this guy’s past behind him, and it does catch up with him. In fact, if it didn’t catch up with him, there would be no show, because that’s what the show is about.

I will admit that there were times during these two episodes when I was eager to learn more about the vengeance plans these men were cooking up. But more often, I was repelled by the blood, the torture, the burned skin of that little boy, and the murders. One man is seen suffocating in a clear plastic body bag, and as he begs for air, he has his head blown off.

Sorry, “Game of Silence” producers, your gruesome storytelling earns you no pats on the back from me.

“Game of Silence” premieres Tuesday night (April 12) with its first episode at 10 p.m. Eastern, then moves to its regular time period on Thursday (April 14).

tv
2 comments about "NBC's 'Game Of Silence' Is All Agony, No Ecstasy".
Check to receive email when comments are posted.
Read more comments >
Next story loading