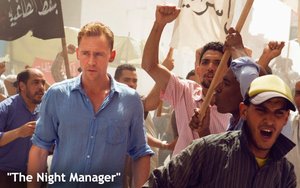 Spooks come out at night.

Maybe that’s what John Le Carré, a master of spy fiction, had in mind when he wrote “The Night Manager,” his 1993 novel about a man who has spent his career as a manager in various hotels in exotic locales -- from Cairo, Egypt, to Zermatt, Switzerland -- but always on the night shift.

In “The Night Manager,” the manager of the title -- Jonathan Pine -- is a former soldier in the British army who becomes embroiled in a story about international intrigue and covert arms dealing. Had he spent his career on the day shift, it’s possible he might never have become thus involved. As it happens, however, the nighttime is when nefarious things happen. And since they sometimes happen in hotels, the night manager is in position to bump up against things that go bump in the night.

“The Night Manager” is a six-part miniseries from England that debuted on BBC One in the U.K. in February and now comes to U.S. television via AMC, which is premiering Episode 1 Tuesday night (April 19).

This miniseries is a breath of fresh air -- sophisticated, worldly, taut and best of all, grown-up. It’s sexy and violent, but never vulgar. The acting is top-notch, the story is like a page-turning novel, and the locations are eye-popping -- from Cairo to Zermatt in Episode 1.

And when you get an eyeful of a hilltop house overlooking the Mediterranean that the producers found to film some scenes for Episode 2, you’ll know that “The Night Manager” intends to take you places you might never have imagined even existed.

This residence in Mallorca, Spain, was chosen to illustrate the fabulous wealth of an international financier named Robert Roper (played by Hugh Laurie), a British billionaire and humanitarian (at least publicly) who has made part of his fortune from the sale of deadly weapons to terrorists -- from rocket-propelled grenade launchers to Sarin gas and even napalm.

Tom Hiddleston plays Pine the night manager, who learns about Roper for the first time in 2011, when Pine is working in a Cairo hotel while Egyptians are running amok in the city’s streets overthrowing the regime of Hosni Mubarak. A mysterious Egyptian woman, a hotel guest, persuades Pine to safeguard some documents that reveal Roper’s involvement in international arms dealing.

Her life is then threatened and Le Carré’s story -- updated from its 1990s time frame -- is off and running. By the end of Episode 1, it’s four years later and Pine is working as the night manager at a posh alpine hotel in Zermatt. And who should show up but Roper, trailed by a shadowy entourage of burly bodyguards, a male personal assistant and a blonde mistress.

With memories of the mysterious Egyptian woman still swimming in his subconscious, and still curious about Roper (who acts as if he senses something familiar about this night hotel manager), Pine contacts a British intelligence officer who four years earlier warned him about Roper and tried to recruit him to help her nail the financier. Now Pine finally agrees to join her efforts and the stage is set.

“The Night Manager” comes to AMC with a good deal of positive buzz from across the pond. Believe the hype, then watch the show.