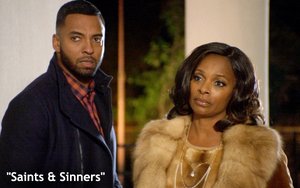 Bounce TV, the Atlanta-based TV network aimed at African-Americans, is heading into upfront season vowing a “major expansion” in its production of original series, the network announced Wednesday.

The network says it will premiere new episodes of its core group of original shows every week of the year starting this fall.

The network’s plans include renewing its original drama series “Saints & Sinners” for a second season (Season One concludes Sunday). Bounce is also renewing its three sitcoms for additional seasons: “Mann & Wife” (for a third season), “Family Time” (for Season Four) and “In the Cut” (Season Three). The network’s stand-up comedy showcase “Off the Chain” will also be back for its fourth season.

Bounce has also hired journalist Ed Gordon -- best known for his years spent at BET and arguably the best-known journalist in the history of African-American television -- to host its first news magazine show. The show’s title: “Ed Gordon.”

Bounce is a so-called “multicast” network available via cable and other TV providers in 93.5 million homes representing 93% of all African-American TV households, the company says.

Bounce -- along with three co-owned channels Grit, Escape and Laff -- is one of a group of burgeoning TV channels that have been made possible in large part by an advancement in TV technology that created dozens of new, digital television channels.

These new “diginets,” as they are called in the TV industry, were created when broadcast TV stations converted to high-definition digital TV transmission in 2009 -- a move that freed up portions of the broadcast spectrum and made it possible to establish a new tier of digital subchannels.

Of the dozens of new channels that have appeared in recent years, most seem to be airing “evergreen” programming such as old movies and vintage TV shows that were otherwise gathering dust in TV company vaults. With its growing number of originals, Bounce is distinguishing itself as one of the few channels in this digital space to make a commitment to producing its own shows.

Bounce is distributed via agreements with TV station groups (including Raycom and Media General), which then place the network on the subchannels of the many broadcast stations they own. As a result, Bounce -- and other diginets too -- appear to TV viewers just like any other cable channels they come across when grazing through their cable lineups with their remote controls.

With its programming lineup at least partially made up of originals, Bounce is reporting inroads with mainstream advertisers such as McDonald’s, for example, while most other diginet-based multicast networks continue to rely almost solely on direct-response TV buys.

“With millions watching each week, Bounce TV originals have become the network’s highest-rated and most-watched programming,” said Jonathan Katz, chief operating officer of Bounce TV, in a statement that was part of Bounce’s programming announcement on Wednesday. “We are significantly increasing our investment in original production in order to meet the strong demand from our viewers and advertisers,” he said.

“Bounce TV has become a powerful television brand with multi-generational appeal and a network that viewers trust because we entertain them in an authentic and culturally-responsible way,” said Elverage Allen, Bounce TV’s executive vice president of advertising sales.

This upfront season, Bounce has scheduled a series of presentations – more than 200 of them – for ad agencies and other prospective buyers in a number of cities across the country.