'Forensic Files' And 'The First 48' Are TV's Hard-Boiled Champions 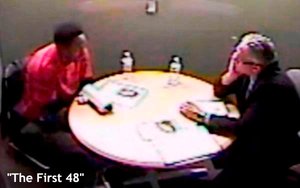 Nearly 60% of the programming on HLN, the CNN-owned cable channel that used to be known as Headline News, consists of one old show.

The show is “Forensic Files,” a real-life crime-and-investigations show that began production in 1996 (the show ceased production some years ago, but the exact year is hard to come by).

HLN airs this show more or less constantly. For example, every weekday during a recent week -- a week which was typical for HLN -- 12 half-hour episodes of “Forensic Files” aired every day from midnight to 6 a.m., six more episodes aired from 4 p.m. to 7 p.m., and six more from 9 to midnight -- a total of 12 hours, or 24 episodes of “Forensic Files” every weekday, 120 episodes in five days.

On a recent weekend, it was even more incredible: Fourteen half-hours from midnight to 7 a.m. on both Saturday and Sunday, and 24 more half-hour episodes from noon to midnight -- a total of 76 episodes of “Forensic Files” over the two-day weekend. The grand total of “Forensic Files” episodes airing on HLN in a typical single week is 196 episodes. Wikipedia says there are only 400 episodes of this show in the first place.

At 98 total hours, “Forensic Files” amounts to 58% of the 168 total hours in a seven-day week on HLN. There seem to be two reasons for this: (1) It’s very inexpensive to run this show because it’s not in production anymore and it is apparently owned entirely by Turner, resulting from its purchase some years ago of Court TV, which used to air the show. And (2) HLN doesn’t seem to have much else going on in the creativity department.

So what in the world is “Forensic Files”? Well, it happens to be one of the most realistic crime-and-investigation shows on TV -- one of two shows that, taken together, provide all you should ever need to satisfy your appetite for true-crime programming. The other show is “The First 48” on A&E.

Both shows traffic in the kinds of crimes -- almost always murders -- that are so common (and, truth be told, too common) that newspapers and TV newscasts don’t even report them, or if they do, these kinds of garden-variety crimes get three column inches or 30 seconds of airtime.

Each episode of “Forensic Files” deals with a single crime from far-flung locations all over the country. Many of the towns and counties featured on “Forensic Files” are decidedly rural or exurban in nature.

Interview subjects include the kin of the deceased, the investigators and prosecutors who sought justice for the victims, and the forensic specialists who are the backbone of this show. They’re the ones who find the tiny pieces of evidence that prove a defendant’s guilt beyond a shadow of a doubt.

Tying it all together is the voice of one of the great voiceover artists of our time -- the narrator Peter Thomas. Now 91, Thomas narrated these shows well into his 80s. His skill at telling these stories -- applying just the right tone to every scene -- is unparalleled.

That’s not to diminish the skills of one Dion Graham, however -- the deadpan narrator of “The First 48.” The title refers to the first 48 hours of a murder investigation, which -- according to Graham’s narration at the beginning of every episode -- is the period following a murder in which the odds of solving it are at their highest.

“The First 48” is more urban than “Forensic Files.” Each episode of this show focuses on units of homicide detectives from a handful of cities featured repeatedly on the show, including New Orleans, Cleveland, Dallas, Birmingham, Alabama, Miami, Houston (Harris County), Memphis and Tulsa, Oklahoma.

This show, even more than “Forensic Files,” represents a category of TV that is largely unsung today -- realistic shows (not to be confused with “reality” shows) that are produced like documentaries, and in many cases, are as good as the best of them. From the crime scenes to the police interrogation rooms (like the one in the photo above from an episode of “The First 48”), I would place “The First 48” right up there with the best examples of real-life documentary filmmaking.

New episodes of “The First 48” air Thursday nights at 9 Eastern on A&E.