Republican Ad Agency Gears Up For Elections With Rocket Fuel 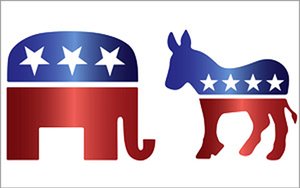 When politicians, committees, PACs and corporations want to reach voters across the country during critical points in the 2016 election season, Republican ad agency National Media comes up with a media plan with Rocket Fuel.

The two companies have worked together since 2014, and they're gearing up for another exciting election year.

It allows for media planning with custom audiences in mind, she said, so National Media's clients can reach out any way they want -- whether that's granular, geo-specific or to a large national audience.

And reaching out to voters at critical times, like right before election day, is important to clients.

Every campaign has to be better than the previous one, Bowers said, adding, "It’s a small market, and reputation means everything."
Adapting in Real Time
Here's an example of how the partnership works with managed service: National Media does an RFP and finds that a client wants to reach pet-loving married women older than 35 in a couple of designated market areas.

National Media comes up with a few ways to build a media plan, then Rocket Fuel comes in and helps decide the different layers of targeting to use with the campaign. As the campaign runs, Rocket Fuel suggests changes and ways to find a lower data CPM.

Things don't align right away, said JC Medici, Rocket Fuel’s national director of politics and advocacy. Each solution is customized, and it takes time to figure out how it fits the needs of a team. For National Media, it took three to four months of tweaking.

"National Media knows how to target, but we’re looking for a little extra guidance to get clients the best cost-efficiency possible," Bowers said. Rocket Fuel provides that guidance, along with the ability to do cross-device targeting -- a rarity among vendors, according to Bowers.

2016: A Unique Election Year
This year, there will be just as many Boomers voting as millennials, Medici noted. And despite the buzz around Trump's earned media, presidential hopefuls have still spent big on TV --  almost $7 billion will be spent between broadcast and cable TV this cycle, according to Borrell Associates.

Spending a lot on TV -- as Jeb Bush did -- failed to guarantee success in the primaries, Medici said. So, in the future, people are going to rethink mixed media during election cycles.