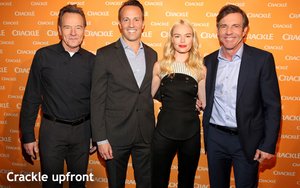 Jerry Seinfeld announced the lineup of upcoming comedic guests in his Crackle series “Comedians in Cars Getting Coffee,” which is probably Crackle’s best-known show.

Under Crackle’s break-free advertising plan, viewers will see only five spots per episode of any Crackle original series with 10 episodes, “instead of 300 ads over the course of a linear TV series,” Crackle said.

Crackle’s announcement indicated that Crackle would work with advertisers to “supersize” advertisers’ commercials by “packaging” them with story arcs “of unique content that will be threaded together across all 10 episodes,” Crackle said.

“Story arcs could be creative narratives about the show’s setting, special insights about the characters from the creators, or a look behind the curtain at production – all designed to grab the viewer’s attention and tied to the brand’s valuable ad.”

In other announcements from Crackle:

* The streaming service unveiled a series of new “multiplex channels” as part of its free, ad-supported “Always On” platform. The “multiplex” plan divides Crackle content, both original and otherwise, into seven categories – comedy, action, drama, thriller, sports, fandom and anime.

* A new, 10-episode, one-hour drama series called “StartUp,” about a new fictional tech company taking shape in Miami and led by a trio of eccentric entrepreneurs. Martin Freeman (star of the “Hobbit” movies and the first season of “Fargo” on FX) is the show’s top-billed star, along with Adam Brody and Wayne Knight (“Seinfeld’s” Newman).

*A new original series called “Snatch,” based on the movie directed by Guy Ritchie, is about a group of 20-somethings in London who “stumble upon” a treasure trove of gold bullion and become mixed up in the city’s criminal underworld.

The company announced renewals of its auction-house drama “The Art of More,” starring Kate Bosworth and Dennis Quaid (seen in the photo above with Bryan Cranston, left, and Eric Berger, second from left, general manager and executive vice president of Sony Pictures Television Digital Networks); and the animated comedy “Supermansion,” starring Cranston.