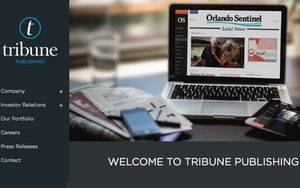 Gannett CEO Robert Dickey issued a public letter to Justin Dearborn, CEO of Tribune, which owns the Los Angeles Times, Chicago Tribune and nine other dailies. The letter revealed Gannett had made a private offer to Tribune on April 12.

The letter suggests that since the initial offer, Tribune has refused to begin formal negotiations, pushing Dickey to reveal the bid to the public.

“What we’re hoping for is to sit down with Tribune’s board and work out a transaction. We’re confident that with cooperation between the companies, we can complete due diligence in a very timely fashion and execute an agreement,” Dickey told USA Today.

According to CNN Money, Tribune issued a statement about 45 minutes after Gannett went public with the bid, saying it is not refusing to negotiate, but that the company needs time to do a “thorough review” of the offer with its financial advisors.

"The Board is committed to acting in the best interests of shareholders and will respond to Gannett as quickly as feasible,” Tribune said in the statement.

According to John Jeffry Louis, chairman of the Gannett Board of Directors, the board "unanimously believes that the acquisition of Tribune would deliver substantial strategic and financial benefits for the combined company, and we are pleased to offer Tribune stockholders a significant and compelling premium and immediate cash value for their investment."

He added that "a combination with Tribune would rapidly advance Gannett’s strategy to grow the USA Today Network.”

“As one company, Gannett and Tribune would have the financial stability to continue maintaining journalistic excellence, independence, high standards and integrity for years to come,” according to a statement from Gannett.