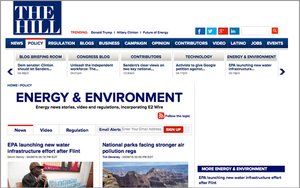 The Hill has introduced the first in its new series of policy magazines: Energy & Environment.

The magazine focuses on energy and environment issues, geared to policy makers in these areas. The Hill’s energy, environment, technology, national security and campaign writers will contribute, as will lawmakers and members of various DC committees.

“It will serve as a platform for lawmakers to share their ideas and for readers to be informed on the latest events and innovations affecting Washington energy policy,” according to the statement.

“The Hill's core audience relies heavily on the publication to provide them with federal policy information… energy and environment is one of our core coverage areas and a vertical with heavy readership,” Prather said.

Prather said the brand wanted to create the model for the series now, in preparation for a new president and Congress in 2017.

Headlines on the online version of Energy & Environment range from “10 rising stars in the energy and environment world” to “Pentagon looks to reduce $4 billion energy bill.”

Prather said the pub "shows our commitment to bringing energy and environment content to influential stakeholders in both the public and private sectors."

Energy & Environment will reach the same circulation as The Hill’s newspaper and digital platform. According to Prather, the magazine will have an audited and targeted, largely Washington-based print distribution of roughly 25,000.

In the coming weeks, The Hill plans to announce the next magazine in the series: Technology & Security.