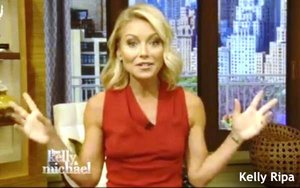 What would wayward air talent say upon their return to TV if Gerald Ford hadn’t given them the go-to cliché in his inaugural address in 1974?

“Guys, guys, guys, guys,” said Kelly Ripa when she returned to “Live!” Tuesday morning after a weeklong absence. “Our long national nightmare is over!”

Ripa, now 45, was two months shy of her fourth birthday when Ford made the “national nightmare” phrase famous on Aug. 9, 1974, the day he was sworn in as president after Richard Nixon resigned.

Heaven knows if Ripa is aware of the phrase’s origins, but her audience lapped it up Tuesday on the show. They gave her a long standing ovation when she came on-stage hand-in-hand with Michael Strahan because -- let’s face it -- co-workers always hold hands, right?

The first five minutes of Ripa’s show -- “Live! With Kelly and Michael” -- was devoted to addressing her absence from the show ever since she learned that Strahan had accepted a promotion to “Good Morning America.”

Apparently, no one informed Ripa that she was losing her co-host to “GMA” until all the phone calls, negotiations and contract signings were over and done with. She felt blindsided, neglected and disrespected. So she protested with a reported sick-out, until ABC persuaded her to come back, reportedly with letters from their lawyers to her lawyers reminding her that she had a contract that she had better not breach.

“Please sit down. Please, please be seated,” Ripa said to her studio audience as they greeted her with a standing ovation. “I’m going to be completely honest,” she said, using a word -- “honest” -- that immediately makes you think the opposite. “I’m fairly certain that there are trained professional snipers with tranquilizer darts in case I drift too far off message!” she said. Honestly?

“I just want to honestly [using this word a second time] sincerely thank you for welcoming me back to this show,” she said. “The love, the show of support through this bizarre time has been really overwhelming.

“I needed a couple of days to gather my thoughts. After 26 years with this company, I earned the right,” Ripa’s speech continued. “And let’s be honest [usage No. 3], I know half of you called in sick to be here, so we get each other!”

“In that time, I gained some perspective,” she said. “I always speak from the heart. I didn’t want to come out here and just, like, say something I might regret. So, what transpired, though, over the course of a few days has been extraordinary in the sense that it started a much greater conversation about communication and consideration, and most importantly, respect in the workplace.” The audience cheered wildly at this “respect” remark.

“And since we’re being honest [usage No. 4], no, I don’t consider this just a workplace. This is my second home. …

“Apologies have been made, and the best thing to come out of all of this, you guys, is that our parent company has assured me that ‘Live!’ is a priority,” she said. She was referring first to the apologies she has reportedly received from Strahan and from Ben Sherwood, president of the Disney-ABC Television Group. The second part of this portion of her speech was meant to address rumors that “Live!” would eventually have to give up its 9 a.m. (Eastern) time period for a third hour of “GMA.”

“There is a commitment to this show and the people that work here and, most importantly, to you the viewers who have watched us every day for 30 years,” Ripa said. “I am thrilled for Michael. I am thrilled for you,” she said, turning to Strahan, who was not seen on-camera during her entire speech. “This is a tremendous opportunity and I couldn’t be, and we couldn’t be, prouder of you and everything we accomplished together.

“So back to the show,” she said. “This is entertainment. It’s supposed to be entertaining. So let’s get back to what we do best and start the show. Oh, wait, incidentally, I just want to say one thing. My Dad, who was a bus driver for 30 years, thinks we’re all crazy. And I think he’s right.”

“And I know this show lives on because you are the queen of morning television and will continue to be!” Strahan said.