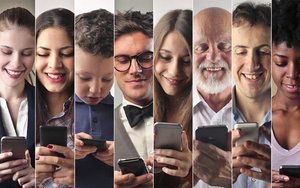 Smartphones may not have the total ubiquity of televisions (yet), but they have definitely made their place in American homes.

According to the Consumer Technology Association, nearly three-quarters (74%) of U.S. households own smartphones, an increase of 2% from last year. On average, Americans now own 2.4 smartphones per household, and the expected repeat purchase for the devices is 91%.

“The smartphone has firmly implanted itself as a staple in the American home,” Danielle Cassagnol, industry communications specialist for the CTA, tells Marketing Daily.

However, smartphones are not quite at the level of televisions, which are found in 96% of U.S. households. (There are nearly as many TVs owned in the U.S. as there are people: 320 million TVs vs. 321 million people.) However, the number of people who say they never intend to buy a television has increased (22% this year compared with 18% from 2015), likely due to the spread of video consumption across many different devices.

“The decrease in television ownership and increase in respondents who say they never intend to buy a TV were both very slight, and remain on par from last year,” Cassagnol says. However, subcategories such as Smart TVs and Ultra Hi-Def TVs are showing growth.

“Connectivity is the driving force behind the fastest-growing tech devices in American households,” Cassagnol says. “The Internet of Things stands out as the unifying theme with the hottest, emerging tech categories.”