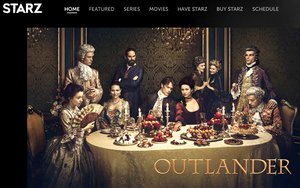 Starz stock was up 9% in midday Friday trading to $27.08. For months, Starz had been rumored to be merging with movie/TV studio Lionsgate.

Starz says it had “lower average subscriptions” for the period versus the same period a year ago. Starz networks now have 24 million subscribers; and Starz Encore networks have 32.4 million. Starz’s combined 56.4 million subscribers is down from the 56.9 million in the first quarter 2015.

During the period, license fees from distributing its original series declined for certain titles sold to Netflix and Amazon in the first quarter 2015.

As other premium cable TV networks groups such as HBO and Showtime have done, Starz recently launched the Starz app with Apple and Google as retail partners, for $8.99 a month. Starz say it is the only premium pay TV app to offer both streaming and downloading options.