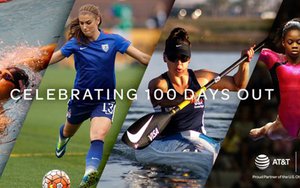 The Summer Olympic Games are just over three months away, which means its time for AT&T (and other brands) to begin ramping up their sponsorship support.

AT&T, which has been a Team USA sponsor for more than 30 years, is taking part in the “Road to Rio” tour, as the title sponsor of the main entertainment stage and creating a special #ATTfanmate experience, where fans can sign up to follow (and receive messages) from AT&T-sponsored athletes such as Alex Morgan, Gabby Douglas, Matt Grevers, and paralympian Alana Nichols, as they prepare for the games.

“The Olympic Games are one of the most social events of the year, bringing together nations and fans from all over the globe,” Bill Moseley, director of marketing communications at AT&T, tells Marketing Daily. “That’s why we created the #ATTfanmate social campaign. As an #ATTfanmate, you can connect with athletes from Team USA as they make their way to Rio.”

The #ATTfanmate experience made its debut in New York’s Times Square earlier this week, and will be a part of the remaining tour dates up until the games’ start this summer. For fans not able to make it to one of the tour stops, the company plans on unveiling a special website where far-flung fans can participate in the campaign, Moseley says.

“In the meantime, you can interact with any of our social channels to see all of AT&T’s activities around the Road to Rio tour, the Gymnastics, Diving, and Swimming team trials, and of course the #ATTfanmate campaign,” he says.

As the Olympics approach, sponsors are beginning to ramp up their fan engagement efforts. Procter & Gamble launched a new campaign for its Venus brand featuring Gabby Douglas, as well as a television spot aimed at moms. The Hershey Company, meanwhile, is changing some of its iconic packaging to feature red, white and blue elements.