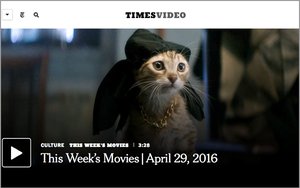 The New York Timesannounced six new video series, most to include virtual reality components, at its NewFront presentation Monday. The company is betting its focus on visual journalism will boost digital growth amid a decline in advertising revenue.

“The future of media is visual,” Times chief executive officer Mark Thompson said during the presentation.

The video series will cover a wide range of topics, including music, sports, business, science and travel.

Each of these shows will also offer advertisers the opportunity to work with T Brand Studio, The NYT’s brand marketing unit, to create “custom, high-quality, marketer videos based on the series's theme that can be discovered alongside Times videos,” according to a statement.

The NYT’s digital advertising is in need of a boost. The company, which reported first-quarter results Tuesday, said total ad sales fell 6.8%, with a 9% drop in print ad sales and a 1.3% decrease in digital ad sales.

Last month, the NYT said it will invest $50 million over the next three years to increase its digital audience around the world.

According to Bloomberg, the newspaper generated $400 million in revenue through online advertising and subscriptions in 2014 and aims to bring in $800 million by 2020.

Adweek reports the NYTis now planning to attach a sponsor to each of its new series and VR projects and will create tie-in branded content that can be distributed across social platforms.

The New York Times Magazine also announced at Monday’s NewFront presentation that its annual "Voyages" issue will act as a springboard for the launch of its first episodic VR series with the same name, set to debut this fall.

For its first season, the "Voyages" series will watch the magazine’s photographers as they travel to distant destinations, creating visual art from landscapes.

In addition, T Magazine revealed plans to debut two VR series this fall. “The Creators” will profile designers, performers and artists, while “Secret Cities” will delve into rarely seen spaces.

"As we've seen with our successful foray into virtual reality, the Times continues to push the boundaries of what is possible for amplifying our news report and features with video,” said Alexandra MacCallum, the company's senior vice president and assistant editor of video.