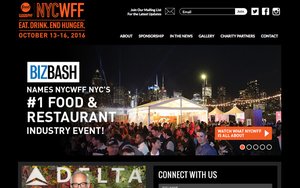 People has officially signed on as a partner for future festivals of the Food Network & Cooking Channel South Beach and New York City Wine & Food Festivals.

“This new partnership will allow for a deeper and richer festival experience for our Food Network and Cooking Channel fans, as well as bring added attention to the important causes both festivals support,” stated Kathleen Finch, chief creative and brand officer for Scripps Networks Interactive, the parent company of Food Network.

Food Network and Cooking Channel have been partners of the festivals since 2007.

The companies hope that People’s reach will help continue to drive awareness for the festivals and assist with generating proceeds for their respective charities.

“Stories about food, recipes and celebrity chefs are among the most popular with the 80 million consumers who engage with the People brand on all platforms,” stated Jess Cagle, editorial director of People and Entertainment Weekly. “Teaming up with the popular Wine & Food Festivals in Miami and New York is a great opportunity to serve and entertain our audiences.”

Between The South Beach Wine & Food Festival (SOBEWFF) and its sister festival in New York (NYCWFF), more than $30 million has been raised to benefit the respective charities for each.

To date, the festival has raised more than $22 million for the school.

NYCWFF proceeds help to end hunger by going to No Kid Hungry and Food Bank For New York City.

According to a statement, the festivals also “draw attention to the vibrant dining culture in their respective cities, provide economic stimulus in their communities and serve as an invaluable platform to drive awareness and engage and inspire people to get involved in philanthropic activities.”

SOBEWFF celebrated its 15th anniversary in February, while NYCWFF will celebrate its ninth year in October of this year.