Staples Wants To Give Breakrooms A Makeover 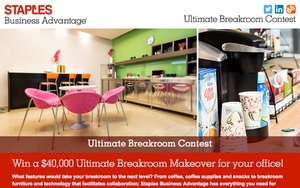 Bored with looking at the same tired tables, chairs and vending machines in your company’s uninspiring breakroom? Well, Staples hopes you are. Staples Business Advantage, its B2B division, is kicking off a Breakroom Makeover Contest with a $40,000 payoff.

Done right, breakrooms “can be a great use of space for companies,” says Kerry Anne Carter, VP of sales at the unit, “and making them inviting is something that helps companies attract and retain talent.”

More and more, she tells Marketing Daily, companies aren’t just updating these rooms to make them look and feel more like a bit of a respite; “they’re recognizing that they can also be a space for informal meetings and brainstorming to happen.”

More companies are moving away from traditional offices spaces, using tactics like “hot desking,” which eliminate assigned seating. She says that makes it more important that dual-purpose areas, such as breakrooms and cafeterias, are inviting.
The Framingham, Mass.-based company says its research has found that to be especially true of Gen Y, with 57% of Millennials identifying a well-stocked breakroom as a perk that’s meaningful to them. Overall, 61% of workers believe taking breaks increases their productivity, and 45% eat lunch at their desks.

Staples is promoting the contest through email and digital channels, and while Carter declined to say how many entries it has received or expects, she says response has been strong. To enter, write an essay explaining why their bedraggled breakroom deserves to win, with Staples putting the five most deserving candidates to a vote. The winner’s $40,000 prize includes design services, fresh and healthy snacks, coffee options, furniture, cleaning supplies, appliances, and flat-screen TVs.

Staples has been struggling, with overall sales falling 7% in its most recent quarterly results to $5.3 billion. Its commercial sales, which typically have been stronger, also declined, slipping 1.4% to $2.03 billion.