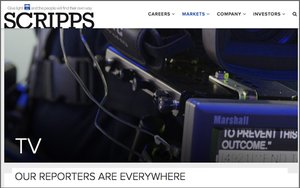 Television revenues grew 13% to $180 million on a same-station basis, and nearly 58% when including new station acquisitions. Mid-day Friday trading of its stock was up 10%. to $16.25.

For the second quarter, Scripps expects revenues to see continued growth -- up 15% to 18%.

Radio revenue slipped 5% to $14.6 million; digital revenue improved 56% to $12.3 million, which included the acquisition of Midroll. Without that purchase, revenue was up 25%.

Overall, E.W. Scripps revenues grew 70% to $209 million, primarily as a result of buying TV and radio stations from the former Journal Communications. It reversed a $5.1 million net loss in the first quarter of 2015 to a net profit of $4.9 million.