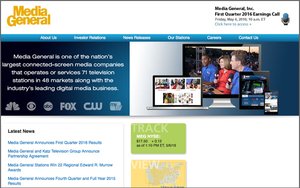 TV station group Media General -- which will close its $4.6 billion deal to be bought by Nexstar Broadcasting Group at the end of this year -- reported strong double-digit revenue gains for its first-quarter period.

Political advertising revenues were a major part of the gain too, totaling $16 million, compared to $1 million in the prior year. Digital revenues grew 25% to $37.9 million.

Media General did not break out local advertising from its retransmission fee revenue results. But it did say advertising “time sales” including political time sales and digital revenue, grew 12% .

National spot TV advertising was virtually the same -- up 1% to $50 million.

The automotive category, which represents 26% of gross local and national ad sales for Media General, gained 4% over the same period a year ago.

It recorded a net loss of $25.7 million versus $4.5 million in the year-ago period. The company grew its adjusted cash flow -- earnings before interest, taxes, depreciation, and amortization -- to $93.7 million from $71.8 million.

Media General estimates broadcast revenues will grow to $319 million to $328 million in the second quarter, and digital revenues to get to $42 million from $47 million.