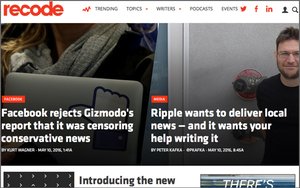 Technology news Web site Recodeannounced Monday that it will lose the slash in its name and focus on expanding its global news coverage and video production, changes spurred by Dan Frommer, the new editor-in-chief.

Re/code — now Recode — has a new logo (which features a shadow of the forward slash, perhaps a tribute to nostalgic readers) designed by Cory Schmitz, the same designer behind Facebook’s Oculus branding. The layout and design of the Web site is also more minimalistic.

Frommer, who took on the role of EIC in March, told readers in a post to “expect more big scoops, smart analysis, features and profiles, plus charts, essays, more podcasts and a push into video" from the new Recode.

"Many Vox sites have fairly robust video operations. We do not," Frommer told Poynter’s Benjamin Mullin (Recode was bought by Vox Media nearly a year ago). "That's an area that I see us expanding into aggressively and quickly. We have to figure out what our voice and product is in video, but that's certainly one of my priorities."

Frommer added in the post that he has become increasingly interested in topics like “robotics, food tech, artificial intelligence, the business of space and the future of work.”

“Recode has its roots as a brand that meant a lot to Silicon Valley and people who worked in the tech industry,” Frommer told Poynter. “But I think some of the most interesting stories are outside California and the U.S.”

Frommer explained that some of the most interesting stories in business right now are the tech stories.

"Essentially, tech is business now. So as you take a brand like Recode and think about where you can take it and invest in new coverage areas. It becomes a very convincing story to say: As technology starts to reinvent the way that various industries are conducted...it makes for a really exciting opportunity for us to add new sections of coverage to the site."