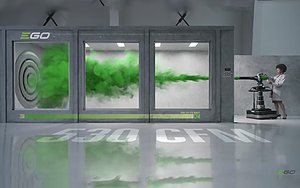 Having shown consumers last year that its interchangeable lithium-ion battery pack is a game changer for powered lawn equipment, Ego Power+ is back this year to demonstrate that not only are its products revolutionary, they offer better performance than their gas-powered competitors.

A new campaign for the brand, from The Escape Pod in Chicago, continues to keep the products in the lab to showcase the tools’ performance capabilities. One ad shows a self-propelled lawn mower rolling up a tilting indoor lawn in a lab with ease, while another shows a leaf blower filling a room with colored smoke. Voiceovers highlight the tool’s “superior power” and makes comparisons to gas-powered equipment, which is often viewed as superior.

“Our commitment was to not do anything in the backyard because it’s boring and what all the existing players are doing, and they’re all gas-powered,” Vinnie Warren, chief creative officer at The Escape Pod, tells Marketing Daily. “If you look at those ads, they’re always the same thing: it’s some goofy guy doing something that’s vaguely amusing in a backyard.”

This is the second-year of the brand’s lab-based campaign. Last year, the brand introduced itself to the masses with a series of ads that showcased the interchangeable 56-volt lithium ion battery. After a year of favorable reviews for the product, it’s now time to focus on the tools’ capabilities.

“The main thrust is to make people feel the technology,” Warren says. “We thought we’d focus more on the coolness of the product.”