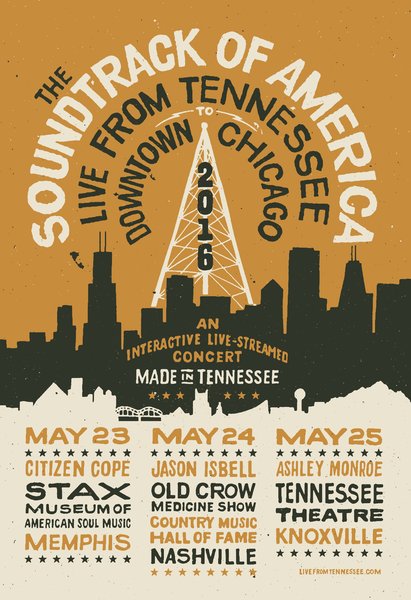 The Tennessee Department of Tourist Development is sponsoring a live-streamed concert series that will be simulcast in Chicago.

Performances from Citizen Cope, Jason Isbell and Old Crow Medicine Show, and Ashley Monroe in Memphis, Nashville and Knoxville on May 23 - 25 will be streamed onto a two-sided video wall in a high-traffic location in Chicago. The “Soundtrack of America: Made in Tennessee” concert will feature interactive capabilities between artist and audience as well as a 360-degree panoramic camera angle, making it the first long-distance concert of its kind, according to the tourism agency.

The tourism campaign aims to highlight and introduce music that is born and fostered within the state.

“As the birthplace of so many genres, Tennessee’s musical history roots are deep with ground-breaking events,” said Kevin Triplett, commissioner of Tourist Development, in a release. "Originating from Memphis, Nashville and Knoxville highlights these music destinations and venues as well as the artists and their music. And it makes this streamed event another incredible first that puts the music stake even deeper in the ground for Tennessee.”

Tennessee is known as a music destination for live performances, historical musical venues and recording studios. It is the state where the genres of blues, bluegrass, country, gospel, soul and rock 'n' roll originated and has more musicians per capita than any other place in the world.

In addition, Chicago is a top tourism market for the state of Tennessee. Due to direct-flight paths into the state’s major airports and close geographical driving range, Tennessee has become an easily accessible destination for many tourists over the years.

The event is being promoted at www.tnvacation.com, and on Twitter @tnvacation, as well as other social media using hashtag #madeintn.