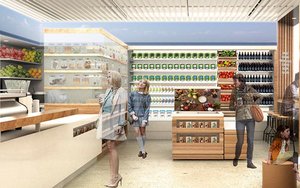 Target says both sales and traffic gained in the latest quarter, but revenues weren’t quite as strong as expected. And the company says it sees signs that consumers may be slowing their spending.

Still, the Minneapolis-based retailer proved its turnaround strategy is solidly working, notching its sixth straight quarter of improvements. And in the signature categories it has given its highest priority — style, baby, kids and wellness — sales advanced three times more than the company as a whole. Amid some key hires, the retailer also says it’s sharpening its digital approach, as well as focusing on improving in-store experiences, including adding a Chobani café in New York City.

“We are pleased with our first-quarter financial results, which demonstrate the effectiveness of our strategy in an increasingly volatile consumer environment,” says CEO Brian Cornell, in its release. “We plan to successfully implement our long-term strategy, even in the face of a challenging short-term consumer landscape.”

While acknowledging that the slowdown was causing it to temper its outlook, Target says it still believes it can achieve forecasts made earlier this year. The retailer expects sales next quarter to come in flat to down 2%.

The company also announced recently that after a year-long search, it hired Mark Tritton as EVP/chief merchandising officer, a role that includes product design and development, sourcing, visual merchandising strategy, and operations. (Tritton comes from Nordstrom and has also worked at Timberland and Nike.) And it promoted Jason Goldberger, president, Target.com, to chief digital officer, a new role.

The company is also continuing to tinker with its store formats, and says it’s adding a new Chobani Café to the Tribeca store in New York City, scheduled to open in October. (The SoHo store has had one since opening in 2012.)