Secrets Of A Tiny Town: AMC's 'Preacher' And The Legacy Of 'Twin Peaks' 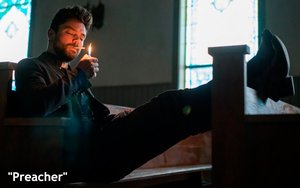 There’s no real consensus on this, but generally speaking, people tend to date the start of the widely accepted Golden Age of Television of the 2000s to the debut of “The Sopranos” on HBO in 1999.

But after just watching the premiere episode of “Preacher,” another fine new series coming to AMC this Sunday, I’ve begun to wonder if it’s more accurate to date the onset of a new kind of television all the way back to April 1990 and the premiere of “Twin Peaks.”

That series looms so large in the memories of many that it might come as a surprise to be reminded that it only ran for a season and a half -- a total of just 30 episodes that came to an end in June 1991. And yet, what a legacy it left -- an incalculable number of subsequent TV series set in small towns populated by eccentrics and weirdos, some violent, some not.

Tell people that a show you just watched reminded you of “Twin Peaks” and everyone will know what you’re talking about. And if you accept the theory that “Twin Peaks” showed TV writers and producers a new way to make TV shows, then you almost have to credit ABC, a mainstream broadcast network, with pioneering a style of television that has long been credited to the likes of HBO and FX.

Which is not to say that “Preacher” is just like “Twin Peaks,” but you know what I mean. “Preacher” takes place in a tiny Texas town with an undercurrent of mystery, despair and violence. In the premiere, we learn that the preacher of the title is not likely a truly ordained minister, but he’s trying to be the kind of inspirational figure the members of the local church are entitled to.

He apparently grew up in the town and has only recently returned. His new guise as a man of peace runs contrary to the town’s memories of him as a man of violence. In his statements and actions, he reminds me of the main character played by Viggo Mortensen in the 2005 movie “A History of Violence” -- a man with a destructive past who seeks to escape it.

In the premiere, we meet the town’s various inhabitants and a couple of outsiders, but we learn only a little about each of them, indicating that their backstories will be peeled back slowly, like the proverbial onion.

“Preacher” is adapted from a 1990s comic book series of the same name, so it has that graphic-novel/comic book look to it. In fact, the way this series looks is among its best features. One of the more attractive elements of much of what is produced for television these days is the cinematography. I’m guessing it’s due, at least in part, to the current generation of movie-making equipment and the skill of the people who operate all of it. But I’m not an expert in the technical aspects of TV and film production.

I just know that many TV shows these days look great, and “Preacher” is one of them. In the premiere episode, the locations -- real or imagined -- range from Texas and Kansas to Africa and Russia. Most of the story takes place in and around this forlorn Texas town, which hardly qualifies as a town at all.

Dominic Cooper stars as the title character, whose name is Jesse Custer. It’s a name that was likely coined purposefully for symbolic reasons because it conjures up at least two names we associate with 19th-century iconography -- the outlaw Jesse James and the doomed Indian fighter of the Little Big Horn, George Armstrong Custer. How this symbolism might make itself apparent in the TV series cannot be determined in the premiere episode, at least by me.

I just know I look forward to learning more about this Preacher and the rest of these townsfolk -- which is to say: This show is another winner for AMC.