'Roots' Remake Demonstrates How TV Changed From Then To Now 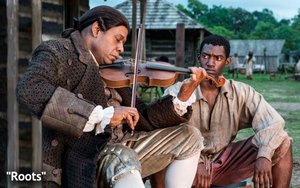 History Channel’s remake of “Roots” conjures memories of a bygone era when big miniseries were a centerpiece of the TV universe.

The original “Roots” ran for eight consecutive nights on ABC starting on Jan. 23, 1977. Its eight episodes still rank among the highest-rated TV shows of all time. For example, the finale on Jan. 30, 1977 had a 71 share in the Nielsen ratings. That means 71 percent of all of the U.S. TV sets in use were tuned to the “Roots” finale on ABC.

These were big events typical of the era when the big three broadcast networks dominated TV. As readers of this blog often point out whenever I write about that era, one reason why the ratings soared for a handful of unique network shows in those days -- from “Roots” to the finale of “M*A*S*H” in 1983, for example -- is because these shows were not readily available to watch anywhere else after they aired on the networks.

If you wanted to see them, you had to make a point of sitting down in front of your TV set at a scheduled time or else miss them. There wasn’t even a way to record them, much less track them down on-line later and watch them at your leisure.

That’s a huge distinction between TV then and now -- which is a long-winded way of pointing out that unless I miss my guess, there is no way this new “Roots” on History Channel will become the kind of phenomenon the original became in 1977. The world -- and TV -- just doesn’t work that way.

And yet none of that should diminish the value of this remake, which makes its own case for having been made in the first place. With the original “Roots” now approaching its 40th anniversary next winter, there’s a huge audience out there with no connection to the old miniseries or even the book by Alex Haley from which it was adapted.

Moreover, the 1970s miniseries was made with the production values that were available to TV producers at the time. They labored under a different set of broadcast standards too.

The filmmaking technology available to producers today has helped render a new “Roots” that looks nothing like the old one. It’s in high-def, of course, and the action sequences are more intense. So is the violence.

For example, some might find it difficult to watch a scene on the first night in which the proud Kunta Kinte is tied to a post and whipped as punishment for attempting to escape. It is a particularly bloody and graphic scene that helps to illustrate how the technology and more permissible standards of TV today (where the depiction of graphic violence is concerned) help this new “Roots” recreate the horrors of slavery in a way that feels closer to what the real ordeal may have been really like.

Like the old “Roots,” this new one boasts an all-star cast with a newcomer -- Malachi Kirby (pictured above right) -- in the role of the young Kunta Kinte, the miniseries’ central character. He’s a teenage warrior from Gambia when he is captured by a rival tribe and sold to English slave merchants. He endures the transatlantic passage chained in the hold of a slave ship (where he participates in a failed uprising) and ends up on a Virginia tobacco plantation a few years before the American Revolution.

The miniseries’ musical director is Ahmir “Questlove” Thompson, whose band, seen on “The Tonight Show Starring Jimmy Fallon,” happens to be called The Roots.

I suspect that many will watch this new “Roots” in the time slots next week in which it is scheduled, while many others will seek it out via other means. And since all viewing – from the premiere date to plus-7 (or even more) -- is becoming more measurable these days, it may even be possible for the total multiplatform viewing of the new “Roots” to add up to something approximating what the original received. However, it will likely take more than four -- or even eight -- consecutive nights for that to happen.

The new eight-hour “Roots” will air over four consecutive nights starting on Monday, May 30, at 9 Eastern, concluding on Thursday, June 2, on History Channel.

tv
1 comment about "'Roots' Remake Demonstrates How TV Changed From Then To Now".
Check to receive email when comments are posted.
Next story loading