Next Thursday, June 2, is Wear Orange Day. It’s a day dedicated raising awareness around gun violence across the country. No matter how people might feel about guns or the Second Amendment or concealed carry or arming teachers, most people can agree that too many kids and teens are killed by firearms every year.

Just how many? According to data from the National Vital Statistics System of the Centers for Disease Control, there were 2,309 firearm deaths among teens between 13 and 19 in 2014, the latest year for which data are available. That means on an average day, six or seven teens die due to firearms — whether through murder, suicide or by accident.

As high as that number sounds, it actually represents a decline from the 1990s. Today, there are about 8 firearm deaths per 100,000 teens. In 1994, that number was almost 29. Either way, those numbers represent the real deaths of actual teenagers and carry with them the grief and desolation of every lost life.

Part of the issue is that violence has long been — and continues to be — a marketable concept in American life; but why and to what end? Is this an acceptable situation? What has changed?

Look at the handgun below. Who is this being marketed to? Why would Sanrio, a company whose tagline is “Small Gift, Big Smile,” want their brand associated with this category? 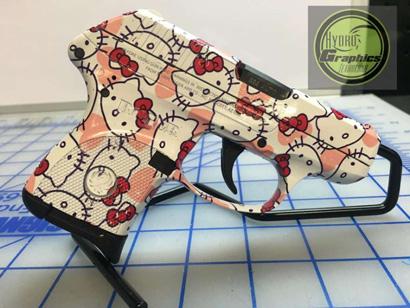 Violence has become a marketable commodity and that’s a strange thing. The acceptability — even primacy — of guns and violence as part of American culture is something that needs examination. It has warped our sensibilities in some basic ways.

I remember several years ago talking to a man, the father of two children. He was talking to me about guns and gun safety. He explained his unique approach to teaching his children. He bought them a rabbit and helped them raise it, then, one day, he went outside with them and — without warning — shot the rabbit. He wanted them to understand and respect the power and danger of guns.

This is screwed up. As a culture, we seem to be doing something like this every day. Firearms have become fetishes and symbols for freedom and independence, for power and security, for safety and wholesome living. Really? Can none of these things exist without weapons? Do we really need to create a climate of fear — particularly among young people — that make firearms and the potential for imminent violence seem like acceptable part of life?

We live in a time of unparalleled safety and security and yet we see and hear messages every day that danger is all around us. That the only way to prevent this danger from overtaking us is to arm ourselves against it. That only by increasing the number of guns in churches, classrooms, restaurants, movie theaters, shopping malls can we decrease the danger we face. This seems like an Orwellian equation to me. 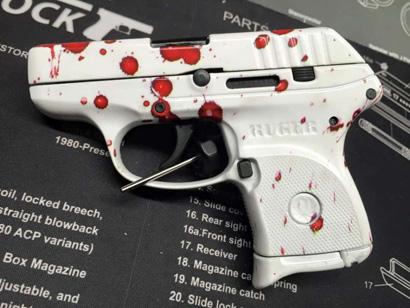 Is this white gun, splattered with paint to look like blood, really being presented as a symbol of sensible safety? Is this the gun a suburban father, worried about his family, is going to select? Rather than sending the message of guns preventing violence, this treatment seems to revel in a gun’s ability to perpetrate violence.

This gun reminds me of the skins players can apply to their weapons in video games, one of the most popular forms of mass media among teenagers. (For the record, I am a big gamer and don’t believe there is any connection between violent games and real world violence. That said, games — like so much of pop culture — do inure people to the concept of violence.)

Do guns and violence need to be such an everyday part of American life? Should brands be tying themselves to firearms in ways designed to appeal to young people? With thousands of teens dying every year due to firearm deaths these are questions we need to consider.

I know where I stand and I’ll be wearing orange next week to let everyone know.