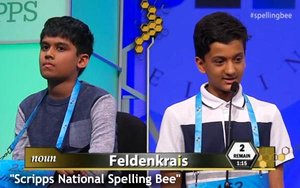 The final round of the annual Scripps National Spelling Bee on ESPN Thursday night was great TV -- and also a potent illustration of the value of live television.

This final round pitted an 11 year-old from Austin, Texas (Nahir Janga, pictured at left), against a 13-year-old from a town near Corning, N.Y. called Painted Post (Jairam Hathwar, right). Their faceoff was supposed to winnow the two down to one.

But there was a problem: The two boys were so focused, so competitive and so doggone accomplished in their spelling skills that neither would yield. In the end, a 25-round final -- which had been designed by the Bee’s organizers in order to prevent a tie -- did not work.

So the two ended up sharing the title -- an outcome that no one could argue with. As the 25-round faceoff approached the 20-round mark, one of the commentators said aloud what viewers at home were thinking: Neither one of these boys deserves to lose.

Why? Because their accomplishments defied belief. At this point in this national spelling competition, the words are notable for their obscurity, and for arrangements of letters that would be unexpected by most of us, including: Kjeldahl (a method for determining the presence of nitrogen in chemical substances), groenedael (a Belgian dog breed) and Euchologion (the name of a book in Greek Orthodox liturgy).

The contestants don’t have to know in advance what the words mean, although it became evident that they were familiar with many of them. But their real genius lay in the way they doped out the spelling by quizzing the quizmaster about the words’ definitions, their national and/or linguistic origins, and alternative pronunciations.

Watching them then spell these words correctly, based on the information they had received, was edge-of-your-seat television, particularly because most, if not all of us watching at home would never have come close to the correct spelling of these words.

The telecast captured it all -- the suspense of the competition, the expressions on the faces of family members in the audience, the reactions of Nahir and Jairam as they watched each other triumph through the grueling 25-round final.

The two boys congratulated each other after each spelling triumph. At one point, a TV camera found Jairam’s grandmother in the audience. She had come all the way from Bangalore to this venue in Oxon Hill, Md., to watch her grandson compete. She beamed as he spelled another seemingly impossible word correctly. A commentator informed us she made the same trip in 2014 to watch Jairam’s older brother, Sriram, be crowned co-champion. This year’s tie was the third consecutive Spelling Bee with co-champions.

The telecast was inspirational, aspirational TV. As they have been for the last nine consecutive years (and 14 of the last 19), the winners are the children of Indian immigrants. The feeling of pride you got watching their spelling mastery was priceless, and you had TV to thank for it.

The two winners’ reactions while they celebrated onstage with family members after they both won were priceless too. When asked how he felt about the win, Nihar said: “I’m just speechless. I can’t say anything. I mean, I’m only in fifth grade!”

It was a great moment in television, and anyone who saw it should count him- or herself lucky to have been a part of it.

tv
1 comment about "How Do You Spell Great TV? S-p-e-l-l-i-n-g B-e-e".
Check to receive email when comments are posted.
Next story loading