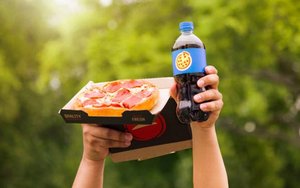 Pizza Hut is engaged in a dual marketing push.

The brand is partnering with Pepsi on a pizza giveaway tied to the soft drink’s “Say It With Pepsi” emojis campaign, while also promoting more ingredients improvements and a new, informational microsite.

From June 1 through August 31, consumers who bring a Pepsi bottle featuring either a pizza-slice or full-pizza “PepsiMoji” graphic (shown in Twitter image above) to a participating Pizza Hut location will receive a free, one-topping Personal Pan Pizza for carry-out.

The pizza symbols are two of the more than 200 proprietary PepsiMoji designs created for the “Say It With Pepsi” campaign launched in May.

The chain has committed to removing BHA/BHT from all meats by the end of this July; removing artificial preservatives from its cheeses by the end of March 2017; and moving to chicken free from antibiotics used in human medicine, also by March 2017.

The brand has also launched a microsite to tout the origins of its ingredients, how it makes its pizzas, and the company’s heritage and innovations.