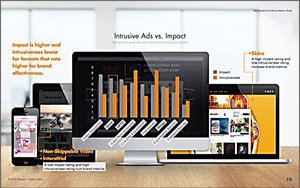 Viewability is now a top-of-mind metric for most marketers. Most agencies and third parties have had a laser-like focus on it, with GroupM leading the charge last year. Now, a new study conducted by Theorem, digital strategy agency, for Sublime Skinz, a provider of skin-based ads, finds that 56% of brand marketers are now using the VCPM metric, or viewable cost-per-thousand impressions, to evaluate campaign performance.

While more than half of the study participants reported that they now use viewability as a key metric for campaign measurement, 52% of those surveyed cited a lack of consistency in viewability measurement across vendors as a key challenge.

Specifically, the study found that existing metrics aren’t yet able to consistently capture viewability for non-standard ad units, identified by participants as among the most effective for brand campaigns.   Seventy-five percent of respondents said it was important to address the lack of measurement for these non-standard units. They said they were reluctant to try more innovative creative executions and to invest in these units because they aren’t included in current standards.

The study suggests that brands are losing out on ad units that may be the most effective for branding because they're not part of standard VCPM measurement protocol.

In addition, the study finds that while VCPM may be a step in the right direction, 86% of marketers find the focus on viewability is actually deflecting their desire for more robust metrics aligned with core brand KPIs (i.e. engagement, brand lift and brand recall). Further, the findings suggest that a specific focus on viewability may, in fact, be impeding creative development.

The study was conducted in March 2016 study among a group of 20 industry decision-makers  on the buy and sell sides.

“The viewability standard is a good entry point but it doesn’t go far enough in terms of assessing viewabiliy. It’s not a high enough benchmark and it doesn’t work well enough across all the different [ad] formats and platforms,” said Dominic Finney, SVP strategy, Theorem. Most importantly, Finney said: “It doesn’t measure non-standard formats and most branding formats are non-standard. That’s a big issue.”

Finney went further, noting that discrepancies exist among vendors such as Moat, Integral Ad Science, DoubleVerify and others—the companies that are actually reporting on viewability. “This is a major issue. You can’t be accurate in your reporting,” he said.

Eighty-six percent of study participants maintained that, while viewability is a good start, the market should place as much focus on other brand metrics—including engagement, brand lift and brand recall—as on viewability metrics. Respondents also stated a need for those campaign metrics to align with core branding KPIs.

The goal of the study is to educate the market. The upshot? The industry needs to tackle viewability metrics for non-standard ad units and inconsistencies among measurement vendors. “The standards need to reflect the ad formats and devices in market,” Finney said. “Trade bodies need to review how vendors measure between each other and improve their measurement methodologies.”

An important takeaway: Viewability is just one metric among others. For brand marketers, it makes sense to use viewability, but there are other things to measure such as engagement with an ad, whether the ad made someone take an action or make a purchase, etc.