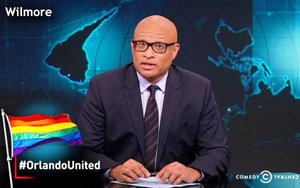 They were an indication of how difficult it is to find just the right tone for late-night shows that are supposed to be funny, but occasionally find their comedic missions derailed in the wake of tragedy.

Jimmy Fallon tried too hard to speak from the heart. Stephen Colbert went overboard with a sermon about love. Seth Meyers had just the right touch. Larry Wilmore actually made an attempt at comedy. Trevor Noah adopted a scolding tone. And Samantha Bee went ballistic.

She took the angry approach in a screed that lasted just shy of eight minutes at the beginning of her TBS show, “Full Frontal.”  She attacked the gun laws (or lack of them) that allow deranged people to easily purchase high-powered weapons such as the semi-automatic rifle the killer used in Orlando.

“Our mass shooter du jour was Omar Mateen,” Bee shrieked. “Born in New York, he beat his ex-wife, he’d been reported multiple times to his employer as homophobic and unhinged, and the FBI had twice questioned him for ties to terrorism. But none of these things disqualified him from legally buying a gun that shoots 45 rounds a minute!” she said.

She expressed dissatisfaction with those who preach love and togetherness following these mass shootings. “After a massacre, the standard operating procedure is that you stand onstage and deliver some well-meaning words about how we will get through this together, how love wins, how love conquers hate. And that is great. That is beautiful, but you know what? F--- it! I am too angry for that!” she said.

Meanwhile, over on CBS, Colbert was delivering his sermon about love. The two-and-a-half minute clip I watched on CBS.com was titled “Despair is a Victory for Hate.”

“I don’t know what to do, but I do know that despair is a victory for hate,” Colbert said, seated at his “Late Show” desk. “Hate wants us to be too weak to change anything,” he said earnestly. “Love does not despair. Love makes us strong. Love gives us the courage to act. Love gives us hope that change is possible. … So love your country. Love your family. … Let’s remember that love is a verb. And ‘to love’ means to do something!”

At around the same time, Fallon was standing in his usual position in front of the “Tonight Show” curtain on NBC making a speech in which he struggled to attach broad meanings about American freedom to this senseless act of mass murder. Viewers at home were engaged in a similar struggle to comprehend what on earth he was trying to say.

Fallon’s speech, which mercifully clocked in at just under two minutes in length, was all over the place. “This country was built on the idea that we do not all agree on everything,” he said, “that we are a tolerant, free nation that encourages debate, free-thinking, believing or not [believing] in what you choose. …

On Comedy Central, Trevor Noah of “The Daily Show” noted that President Obama has held 12 state dinners during his presidency, and made 16 speeches following massacres. “Right now, the White House is using more Kleenex than it is good napkins,” Noah said.

“America needs to ask itself the question: Do you want to be a country that takes reasonable measures to protect its citizens or should we tell the president to prepare speech No. 17?” Noah asked.

“Our hearts are broken for you, Orlando,” said Larry Wilmore at the top of “The Nightly Show” on Comedy Central. “But we are with you. And tonight we’re gonna talk about it in the hopes that we can provide some laughs and maybe play some small part in the healing,” he said.

To “provide some laughs” is a risky challenge to undertake at such a time. “It was first and foremost an attack on an American minority group,” Wilmore noted. “The deadliest mass shooting in American history specifically targeted a gay nightclub – not only during pride month, but on the eve of the gay Super Bowl! [by which he meant Sunday night’s Tony Awards].”

Like Samantha Bee and others, Seth Meyers focused on the gun issue. “This was an attack on LGBT people fueled by bigotry and hatred, and the shooter was apparently inspired by ISIS,” Meyers said. “But we’re gonna talk about guns because whether the shooter was a homophobe, mentally ill, a terrorist inspired by ISIS or all three, what allowed him to kill so many people on Sunday was his gun.”