Why Anderson Cooper's Ban On Orlando Killer's Name Is Wrong 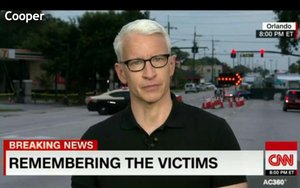 We appreciate the sentiment, Anderson, but your vow to refrain from uttering the name of the Orlando nightclub shooter is wrong-headed.

Have you heard this one? Anderson Cooper, one of the nation’s most respected journalists, announced on CNN some time on Monday that, from that moment on, he plans never to say the shooter’s name or show his photo on the air.

“We will not say the gunman’s name or show his photograph,” Cooper is quoted as saying in an Associated Press story about his ban of the name and picture of the late Omar Mateen. Whether he was referring to the whole of CNN joining him in this campaign was unclear. “It’s been shown far too much already,” Cooper said of Mateen’s photo.

Says who? Anderson Cooper? How exactly does one judge whether someone’s photo has been shown “too much”? And what is “too much” anyway? A hundred times? A thousand times? A million?

Whatever the number, Cooper thinks the limit was reached some time on Monday. According to the AP, he further explained that saying the killer’s name draws attention away from those who are much more deserving -- namely, Mateen’s victims. Few would disagree that they deserve attention. But it’s also hard to demonstrate that identifying their killer by name takes attention away from them. How does that work exactly?

The real problem with Anderson Cooper’s name-and-photo ban of Omar Mateen is a journalistic one. For better or worse, this guy had a name. And since journalists are in the business of applying plain English to the reporting of stories, then logic would dictate that this man’s name be used when reporting on his deeds, no matter how heinous.

Moreover, the profession of journalism requires that its practitioners work in a world in which facts matter. And a person’s name -- even a killer’s name -- is a fact that cannot be wished away.

Please let me be clear: I am by no means advocating the casual mention of Omar Mateen’s name out of some sort of politeness toward him. It just seems ludicrous to think he can somehow be expunged from the historical record by referring to him with phrases other than his name -- phrases such as “the Orlando gunman” or “the Orlando nightclub killer.”

Like so many other cultural fads these days, the “Cooper option” of not naming the Orlando gunman when talking about him is now spreading over the land. It has even reached the FBI, where director James Comey said on Monday that he too won’t utter the killer’s name in public because he thinks the posthumous fame accruing to the dead killer in the wake of the massacre last weekend might inspire copycats seeking fame of their own -- posthumous or otherwise.

This is another rationale that crops up at times like these, that our society is awash in would-be killers just aching for a chance to become notorious in the news media, if not the pages of history. As soon as they see how famous Omar Mateen has become, they’re sure to follow his example.

“You will notice that I'm not using the killer's name, and I will try not to do that,” said the nation’s top G-man at a news conference on Monday. “Part of what motivates sick people to do this kind of thing is some twisted notion of fame or glory, and I don't want to be part of that for the sake of the victims and their families,” he said, according to a USA Today story that, come to think of it, also refrained from mentioning the killer’s name.

I happen to disagree with this kind of thinking. I will concede that the director of the FBI probably knows more about the nature of copycat killers than I do. But I tend to believe that people who harbor the kinds of infamy fantasies the director is talking about are probably already too delusional for anyone to predict what they will do next. Some might be crazy enough to think Omar Mateen is a person to be emulated, while others might think otherwise.

Who can say whether the repeated mention of Mateen’s name or the showing of his photograph will motivate such people either way? Even a deluded person might conclude that having the word a--hole affixed to his name for all time is not a goal worth pursuing.

As for Anderson Cooper, his decision to omit the fact of this man’s name from his reporting indicates that in this case, Cooper is allowing sentiment to interfere with his journalistic responsibility to remain cool, clear-headed and -- dare I say -- dispassionate in reporting this story (difficult as that might be).

Omar Mateen’s name is an integral part of the story -- just like every other detail about his life’s story that could contribute to our understanding of why he did what he did. It doesn’t necessarily follow that including his name in reporting this story honors him somehow at the expense of his victims. You could look at it in just the opposite way -- that mentioning his name often helps ensure that he is appropriately dishonored.